Felix Auger-Aliassime survived a major scare but managed to beat Peruvian qualifier Juan Pablo Varillas and reach the second round of the French Open, here on Sunday. 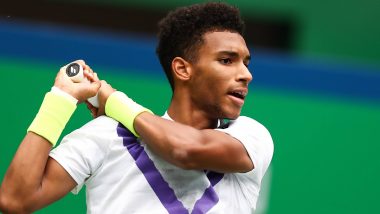 Paris, May 22 : Felix Auger-Aliassime survived a major scare but managed to beat Peruvian qualifier Juan Pablo Varillas and reach the second round of the French Open, here on Sunday. The World No. 9 recovered from a slow start to overcome Peruvian qualifier Juan Pablo Varillas 2-6, 2-6, 6-1, 6-3, 6-3 in a dramatic opening day encounter on Court Philippe Chatrier. In a tight match, the Canadian struggled to cope with the World No. 122's variety and intensity in the first two sets, with the Peruvian visibly pumped on what was his Grand Slam debut. However, Auger-Aliassime managed to turn the tables as he cut down on errors. Rafael Nadal Thanks Fans For Support Ahead Of French Open 2022 Encounter Against Jordan Thompson.

The ninth seed found more first serves and hit with greater power, forcing Varillas into mistakes to advance after three hours and 13 minutes. The 21-year-old is making his third appearance in Paris and will next play Aslan Karatsev or Argentine qualifier Camilo Ugo Carabelli. Earlier this month, the Canadian reached the quarter-finals at ATP Masters 1000 events in Madrid and Rome in May. In their first ATP head-to-head meeting, Varillas made a fast start against Auger-Aliassime, quickly finding his range to break immediately. He hit his consistent groundstrokes with depth and precision for the opening 90 minutes, committing just seven unforced errors across the first two sets to take control. Wimbledon Championships 2022: WTA Too Decides Not To Award Ranking Points for This Year.

However, Auger-Aliassime refused to go away, raising his level in the third set as he cut down on mistakes and started to take the ball earlier to remove time from the Peruvian, who started to tire. The Canadian won 100 percent (12/12) of his first-serve points in the fourth set to level the match before he gained the crucial break in the eighth game of the fifth set to eventually break Varillas' resistance. He then held serve to triumph, letting out a roar in relief.

(The above story first appeared on LatestLY on May 23, 2022 10:50 AM IST. For more news and updates on politics, world, sports, entertainment and lifestyle, log on to our website latestly.com).