When Is Roger Federer Match at Laver Cup 2022? Know Date and Time in IST of Tennis Great’s Last Professional Outing

Roger Federer would be hanging up his boots but not before putting up a spectacle as he gets set to team up alongside Rafael Nadal at the Laver Cup 2022. Scroll down to check out when and where the match would be played. 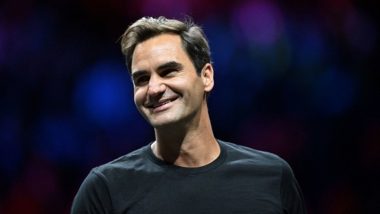 Roger Federer, one of the all-time greats in tennis, is set to hang up his boots and walk into the sunset, after announcing earlier that Laver Cup 2022 would be his last professional tournament. With a total of 20 Grand Slams and a host of other achievements, Federer would be retiring from tennis as one of the sport's most accomplished players, who was known for his skills on the pitch and humility off it. The Swiss great, representing Team Europe in Laver Cup 2022, would not be in singles action but rather compete alongside Rafael Nadal, one of his rivals and friends in doubles competition. Roger Federer To Team Up With Rafael Nadal in His Final Professional Tennis Match As Duo Set To Feature in Doubles Action at Laver Cup 2022

Federer had wished he got to play alongside Nadal in his final professional tennis match and his wish came true when Laver Cup 2022 announced its schedule for Day 1. For one final time, Federer would be in action alongside Nadal as the greats aim to put up a memorable show when they face the team of Jack Sock and Frances Tiafoe. Ahead of this much-awaited clash, let us take a look at some details of this match.

When is Roger Federer clash at Laver Cup 2022?

As mentioned before, Federer will be teaming up alongside Nadal in his last professional tennis match. The Laver Cup 2022 doubles fixture would be contested at the O2 Arena in London on September 23 (Friday) and is scheduled to start after 11:00 pm IST (Indian Standard Time). Fans who are interested in watching this epic team in action can tune into the Sony Sports network to watch this game on TV. For those interested in watching live streaming of this clash, SonyLIV's app and website would be the destinations.

(The above story first appeared on LatestLY on Sep 22, 2022 08:27 PM IST. For more news and updates on politics, world, sports, entertainment and lifestyle, log on to our website latestly.com).