We just witnessed an amazing episode of NXT Super Tuesday II on September 8, 2020, where Finn Balor became the NXT Champion by defeating Adam Cole. This match was indeed one of the best in the year 2020. This week started off with Raw where WWE Champion Drew McIntyre returned after a gap of two weeks. 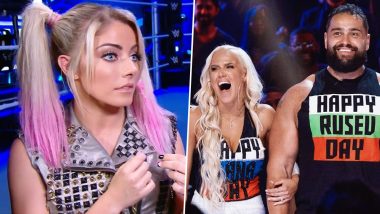 We just witnessed an amazing episode of NXT Super Tuesday II on September 8, 2020, where Finn Balor became the NXT Champion by defeating Adam Cole. This match was indeed one of the best in the year 2020. This week started off with Raw where WWE Champion Drew McIntyre returned after a gap of two weeks. The Scottish Psychopath took out his Clash of Champions 2020 opponent Randy Orton that night by giving a total of three claymore kicks which was a perfect payback for the three punt kicks he had received from The Viper two weeks back. Meanwhile, you have arrived at the right platform, if you are looking for top-five WWE news which includes Alexa Bliss new podcast details to Lana's reaction on Rusev's AEW Dynamite debut. WWE NXT Super Tuesday II Sept 8, 2020 Results And Highlights: Finn Balor Defeats Adam Cole to Win NXT Championship; Rhea Ripley Emerges Victorious Over Mercedes Martinez.

WWE confirmed that Alexa Bliss new podcast titled as 'Uncool with Alexa Bliss' would debut on Tuesday, September 22. WWE has revealed this news when Bliss is going through character transformation at SmackDown where she will be a full-time ally of 'The Fiend' Bray Wyatt. Meanwhile, Alexa Bliss fans would look forward to listening to her on the podcast.

In spite of the return of Drew McIntyre and Dominik Mysterio defeating Buddy Murphy, this week's episode of Raw drew fewer viewers and its rating dropped compared to last week's episode. This week's Monday Night Raw episode was above average, however, it drew only 1.725 million viewers on the USA Network, according to Showbuzz Daily. This is indeed a matter of concern for Vince McMahon and company as last week’s episode drew 1.900 million viewers. WWE Raw Results Sept 7, 2020 Results and Highlights: Drew McIntyre Takes Down Randy Orton With Claymore Kick, Dominik Mysterio Defeats Buddy Murphy to Register His First Singles Victory.

Former WWE wrestler Rusev made his debut on the latest episode of AEW dynamite, where he was revealed as Kip Sabian's best man. Meanwhile, Rusev's wife reacted on her husband debut where she made two tweets which she deleted later. In the first tweet she said that she is happy Rusev has finally bleached his hair and in the second she had mentioned that she love seeing creative innovative ideas come to life. Check out the video of Rusev's debut below.

Mickie James will get the opportunity to win Raw Women's title in the upcoming episode of Raw when she will face Asuka. Meanwhile, she has a heartfelt message for Alexa Bliss. James somehow stumbled upon a GIF posted by a fan three years ago, featuring both herself and Alexa going at it in the ring. Check out Mickie's tweet below.

Sonya Deville had to leave WWE as she lost to Mandy Rose at SummerSlam 2020 in 'Loser Leaves WWE' match. The wrestler after her defeat posted on Instagram a goodbye message. However, WWE has not yet released any official statement of her departure. Sonya's recent beach post on Instagram says that she was not happy with the role she was playing in WWE, the diva will reinvent herself and will only return to make a big name, as settling for less is just not her game. Check out Sonya Deville's post below.

Never thought I’d be here, momma always told me to stay clear, money and fame is smoke and mirrors but I’m not lookin in the rear view mirror. Weather I’m sittin there or up here everyone looks the same, but that doesn’t mean I have to play the same game. If I wanna be somewhere that everyone remembers my name I gotta reinvent, dedicate and attract the same. Settling for less just ain’t in my game. You wanna be wit me ya gotta carry the name.

Fans will now look forward to SmackDown episode where Bray Wyatt might return with Firefly Fun House show, also it will be interesting to see how WWE plans script for Sami Zayn who is eyeing his Intercontinental belt which he never lost. Stay tuned with LatestLY for more updates and news from WWE.

(The above story first appeared on LatestLY on Sep 11, 2020 09:01 AM IST. For more news and updates on politics, world, sports, entertainment and lifestyle, log on to our website latestly.com).