Apple iPhone SE 3 5G With A15 Bionic SoC Likely To Be Launched Next Year: Report

Apple is rumoured to launch the iPhone SE 2022 model next year. The upcoming handset will be introduced as the successor to the iPhone SE 2nd-gen and is tentatively named as iPhone SE 3. 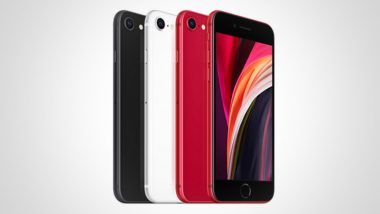 In terms of specifications, iPhone SE 3 is expected to be powered by an A15 Bionic chipset. However, other reports have claimed that it will be powered by an A14 Bionic processor. It might sport the same 4.7-inch LCD display as its predecessor and could retain Touch ID and home button.

Apple iPhone SE 3 is speculated to be launched in March or April and will be an important device as the company plans to drop its Mini model from its flagship lineup. The handset is also said to debut in the Indian market. Apart from this, nothing more is known about iPhone SE 3 aka iPhone SE 2022.

(The above story first appeared on LatestLY on Oct 12, 2021 12:05 PM IST. For more news and updates on politics, world, sports, entertainment and lifestyle, log on to our website latestly.com).