Google Meet to Soon Get Noise Cancellation Feature in India 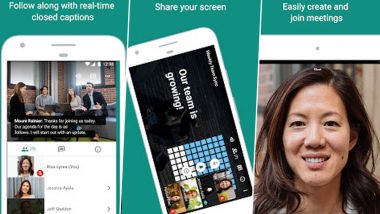 San Francisco, July 2: Google has announced that its noise cancellation feature for Meet teleconferencing app will soon start rolling out in more markets, including India. In a support document, Google said apart from India, the noise cancellation will roll out to users in Australia, Brazil, Japan and New Zealand in the coming weeks. Google Rolls out Nearby Sharing Feature to Android Beta Users for file sharing: Report.

The company also makes clear that it won't come to people in South Africa, the UAE, and the immediately surrounding areas without stating why. Google introduced its AI-powered noise cancellation feature for the Meet in early June. The search engine giant was working on the feature for around a year and a half, using thousands of its own meetings to train its AI model. The noise-cancellation feature uses a machine learning model that is capable of understanding the difference between noise and speech.

To filter out background noise, a user's voice is sent from the device to a Google data centre, which is where it goes through the machine learning model. Once the processing is completed, it gets re-encrypted and sent back to the Google Meet call. The feature is expected to become widely available for G Suite enterprise customers by the end of this month.

(The above story first appeared on LatestLY on Jul 02, 2020 04:41 PM IST. For more news and updates on politics, world, sports, entertainment and lifestyle, log on to our website latestly.com).