Diane Feenstra from Michigan said her Apple Watch alerted her to an abnormally high heart rate, sending her to urgent care where an EKG revealed that she had had a recent heart attack without realising it. 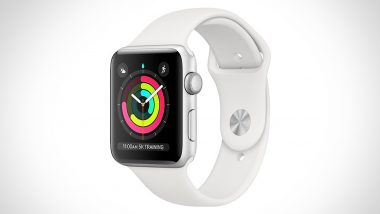 San Francisco: The Apple Watch has again been credited with helping to detect a user's potentially life-threatening heart condition, media reports said. Diane Feenstra from Michigan said her Apple Watch alerted her to an abnormally high heart rate, sending her to urgent care where an EKG revealed that she had had a recent heart attack without realising it, reports 9To5Mac. Apple Watch Series 7 Likely To Feature Flat-Edged Design: Report.

"The day in question, April 22, I had 169 beats per minute heart rate even though the most vigorous exercise I had done was to walk up 12 steps. So I called my husband at work and said do you think this is concerning? And he said call your doctor," Feenstra told WZZM in an interview.

At the local urgent care centre, doctors performed an EKG, which revealed that Feenstra had recently had a heart attack without realising it. According to the report, the symptoms of a heart attack may vary a lot in both men and women.

"I had pain going down my left hand, I had a little swelling in my left foot, I had indigestion that I just explained away as acid reflux that I was experiencing as I got older," Feenstra said. "The biggest thing was a pain in my shoulder and I figured I had vacuumed and put my muscles out of whack somehow," she added. "It's such an easy thing to see what your heart rate is… Had I not done that that morning, who knows, I may have had another heart attack that could have been fatal," Feenstra said.

Feenstra then visited a clinic located at Grand Rapids in Michigan where additional testing uncovered that she had a full blockage in the widow maker artery, following which she had a stent procedure done to rectify the situation. Since then, Feenstra is touting the Apple Watch as a lifesaver after having originally received it as a birthday gift, the report said.

(The above story first appeared on LatestLY on Jul 07, 2021 11:03 AM IST. For more news and updates on politics, world, sports, entertainment and lifestyle, log on to our website latestly.com).