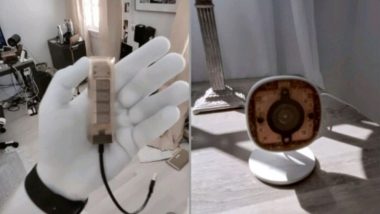 Chinese phone-maker OnePlus has permanently disabled a feature on its new mobile that gave its camera "X-ray vision", according to a report on the Sun. In May, users had reported that OnePlus 8 Pro's infrared "Photochrom" lens could see through certain plastics and clothes.

Photos went viral on social media revealing that the infrared lens could peer through the casing of gadgets to reveal the wiring and batteries below. One image also showed that the camera could also read text on a piece of paper that was hidden under a t-shirt. OnePlus 8, OnePlus 8 Pro Flagship Smartphones Receive Google's Android 11 Beta Update.

A software update from the company has been rolled out for the new device and after which, the camera of the phone will not be able to see things and clothes across.

Here are a few viral images of the banned feature:

Here's another image shared by a user on Twitter:

The OnePlus 8 Pro's X-ray feature is very cool to mess about with, so I will be sad to see it removed at some point in the near future now. pic.twitter.com/GG8pcG5sB7

In May, OnePlus made a post on Weibo and explained that because of "concerns about privacy" they have decided to temporarily disable the filter function through software upgrades," which will go live within a week. It further mentioned that it will then alter the software and re-enable the camera in a future update.

(The above story first appeared on LatestLY on Jul 13, 2020 10:59 AM IST. For more news and updates on politics, world, sports, entertainment and lifestyle, log on to our website latestly.com).