OnePlus 9 RT With Android 12 Likely To Be Launched in October 2021: Report

Last month, we heard reports about the OnePlus ditching the OnePlus 9T smartphone. According to Android Central, OnePlus will launch a new handset under the T series in October 2021. 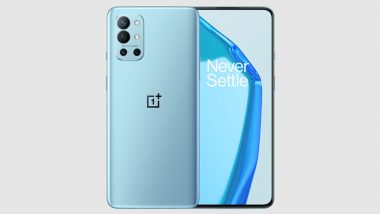 Last month, we heard reports about the OnePlus ditching the OnePlus 9T smartphone. Now as per a new report, OnePlus will launch a new handset under the T series in October 2021. According to a report from Android Central, this smartphone is said to be the OnePlus 9 RT phone and a tweaked version of the OnePlus 9R 5G which was launched earlier this year. However, OnePlus has not released any official statement regarding the OnePlus 9 RT device. OnePlus 9T Will Reportedly Not Launch This Year, Here’s Why.

Reports have also leaked several specifications of the handset. OnePlus 9 RT will run on Android 12 based OxygenOS 12 user interface. OxygenOS 12 is expected to come with new ColorOS features including floating windows, a theme store and more. OnePlus 9 RT is likely to feature the same 120Hz AMOLED display as that of OnePus Nord 2. It is said to come powered by a superior version of the Qualcomm Snapdragon 870 chipset.

For photography, it is likely to come with the same 50MP primary camera lens with a Sony IMX766 sensor as that of the Nord 2 phone. The handset is expected to come packed with a 4,500mAh battery with 65W fast charging support. OnePlus 9 RT is said to be made available in China and India.

(The above story first appeared on LatestLY on Aug 20, 2021 12:58 PM IST. For more news and updates on politics, world, sports, entertainment and lifestyle, log on to our website latestly.com).