Realme Narzo 50 5G Likely To Be Launched in India Next Month: Report

Realme is now preparing to expand its Narzo 50 lineup by adding a 5G derivative of the smartphone, which reportedly will be launched in India next month. 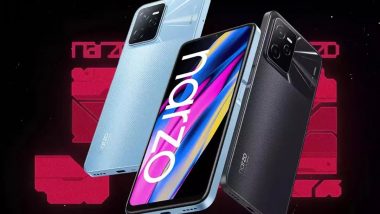 Realme could offer the Narzo 50 5G in three storage configurations - 4GB + 64GB, 4GB + 128GB & 6GB + 128GB. However, there's no official word from the brand regarding the launch of this handset. We expect more details to surface about the upcoming phone in the coming weeks. The handset could come in two colours - Black and Blue.

The Realme Narzo 50 5G is said to sport an FHD+ display. For photography, it is likely to pack a 50MP primary camera at the back. It is likely to get a massive 5,000mAh battery with fast charging support. It could run on Android 12-based Realme UI 3.0 out of the box.

(The above story first appeared on LatestLY on Apr 29, 2022 10:06 AM IST. For more news and updates on politics, world, sports, entertainment and lifestyle, log on to our website latestly.com).