Scientists from Britain's University of Portsmouth and National Renewable Energy Laboratory in US, created an enzyme similar to the 2016 study done in Japan's recycling plant which could eat common forms of plastic. 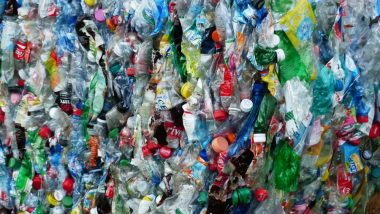 The use of plastic is very harmful for the environment and while some people across the world may have stopped or reduced the use, the damage has already been done. Oceans across the globe have a lot of plastic waste claiming loss of aquatic lives. Plastic as a material takes years to degrade and it is time we completely stop and seek alternatives for usage. Now scientists from UK and US have accidentally developed an enzyme which can tackle the plastic problem! This bacteria can feast on plastic bottles and the move helps in full recycling.

Scientists from Britain's University of Portsmouth and National Renewable Energy Laboratory in US, created an enzyme similar to the 2016 study done in Japan's recycling plant which could eat common forms of plastic. The bacteria would eat polyethylene terephthalate or PET, mostly found in water bottles, food containers, and polyester. The scientists were trying to model the enzyme and ended up with a mutant strain of the same thing. Only better!

The Japanese researchers had given details about the structure of the enzyme which allowed the particular bacteria to eat plastic. While attempting to create a mutant and study its evolving process, these scientists ended up making the same enzyme but a more efficient one as breaking down the PET. “What actually turned out was we improved the enzyme, which was a bit of a shock,” said Prof John McGeehan, at the University of Portsmouth, UK, who led the research. “It’s great and a real finding.”

This mutant breaks down the plastic much faster than it takes years in the ocean. Now they are sure the process can be speeded up with further research. "What we are hoping to do is use this enzyme to turn this plastic back into its original components, so we can literally recycle it back to plastic,” said McGeehan. If this actually turns into a reality then we can clearly reduce the plastic in the environment scientifically. But that being said, it is also an individual's duty to reduce the use of plastic and take the step in not causing more damage to the already damaged world.

(The above story first appeared on LatestLY on Apr 18, 2018 09:14 AM IST. For more news and updates on politics, world, sports, entertainment and lifestyle, log on to our website latestly.com).