Pictures of Tiny Baby Ocean Sunfish Compared to Fully Grown Giants is Making Netizens Lose Their Mind! Know More About One of Heaviest Bony Fish in The World 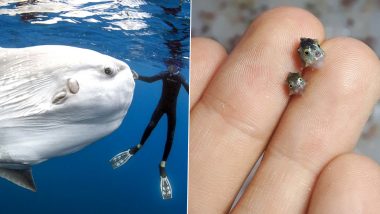 The world and its creatures are full of mystery, many that we are only learning about from the internet in recent times. From scary underwater fish to mysterious and alien-looking sea slugs, such things always fancy the internet. Now there's new learning about ocean sunfish, one of the heaviest bony fish in the world. A tweet has shown how the giant sunfish looks and how tiny their babies are. The great difference in their size is making everyone lose their minds because it seems unbelievable! In this article, we tell you more about these fish. Fish With Human-Like Teeth And Lips Spotted in Malayasia; 4 Times Animals And Other Creatures With Human Face & More Features Shocked the Internet (Pictures & Videos).

Twitter user Dr Michael Sweet posted pictures of the ocean sunfish, a fully grown one with one of the tiny babies. The baby fish look no bigger than beads but the fully grown ones are huge, can grow up to weighing between 247 and 1,000 kg. So from a beaded tiny baby to a giant 1000kg fish, that's sure intriguing. The tweet is now going viral and some people have said it looks like "straight out of Pokemon." Are These The Weirdest Sea Creatures Ever Seen? Russian Photographer Shares Underwater Pictures from Atlantic and They Are Creepy!

The ocean sunfish or common mola is one of the heaviest known bony fishes in the world. Adults typically weigh between 247 and 1,000 kg. Babies.....well they weigh very little.... pic.twitter.com/jJgrR0zjlj

Here's a Side View of The Baby:

Close up, side view of the ‘little un’ pic.twitter.com/nNiCFZB70p

HOW DOES THAT TURN INTO THAT Like. Ok it’s a stupid question but damn Mother Nature pic.twitter.com/7Vg97LutqL

It is sure amusing to know how these tiny fish grow into giants. We tell you more about this fish.

The ocean sunfish or common mola are among the heaviest known bony fishes in the world. They are usually found in tropical and temperate waters. They have a weird structure with a tall head and fins like a shark, but its main body is flattened laterally. They are often mistaken for sharks because of their fins. Their predators include bigger killer whales and sharks. They are also a delicacy in some parts like Japan, Korea and Taiwan. In their tiniest form, they look like the sun. The newly hatched larvae of the fish are only 2.5 mm and weigh less than one gram. Not all of them survive those that do grow to millions of times their original size. They can grow upto 60 million times their birth size! It is needless to say, the most extreme size growth seen in any vertebrate animal.

(The above story first appeared on LatestLY on Jul 25, 2020 05:40 PM IST. For more news and updates on politics, world, sports, entertainment and lifestyle, log on to our website latestly.com).