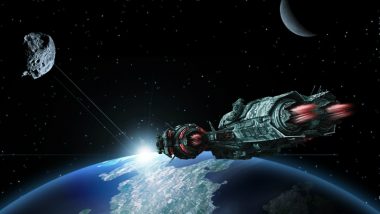 New York, Oct 18: In a big relief, two large pieces of orbital debris barely avoided colliding with each other this week although the chances of a smashup were calculated to be over 10 per cent by California-based space tracking company LeoLabs.

The two bodies, a dead Russian satellite and a spent Chinese rocket body, have a combined mass of about 2,800 kgs, LeoLabs said.

A collision of the two objects would have created a huge cloud of debris as they were hurtling toward each other with a relative velocity of 52,950 kilometres per hour, Space.com reported on Friday.

According to astronomer and satellite tracker Jonathan McDowell, who is based at the Harvard-Smithsonian Center for Astrophysics, a collision of the two objects would likely have led to a "significant (10 to 20 percent) increase in the LEO (low Earth orbit) debris environment."

The close approach of the two objects occurred at 1256 GMT on Friday.

"Our latest data confirms Cosmos 2004 is still intact. Our final risk assessment showed a computed miss distance of 11 meters (+16/-11 meters at 1-sigma uncertainty). More to come next week as we will share a more detailed risk analysis of this event," LeoLabs said in a tweet on Friday.

A report on space debris by the European Space Agency estimates that there are currently about 34,000 debris objects larger than 10 centimetres, about the size of a softball, currently in orbit.

Since the world's first artificial satellite, Sputnik 1, was launched into Earth's orbit in 1957 thousands of additional satellites have joined it.

While the number of satellites in lower Earth orbit -- objects at an altitude between 99 to 1,200 miles above the Earth's surface -- has increased, so has the amount of debris or space junk orbiting above our heads.

The staggering amount of space debris poses a difficult challenge for safely operating spacecraft in lower Earth orbit without collision, according to the West Virginia University in the US.

(The above story first appeared on LatestLY on Oct 18, 2020 08:54 AM IST. For more news and updates on politics, world, sports, entertainment and lifestyle, log on to our website latestly.com).