Who Is Sanjal Gavande? Know About the Kalyan-Born Engineer Who Is Part of Blue Origin Team That Built Space Rocket for Jeff Bezos

Sanjal Gavande, who works as systems engineer at Blue Origin in Seattle, says it was her childhood dream to fly to space which will come true soon. 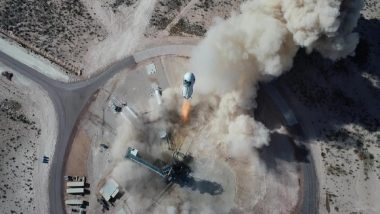 Mumbai, July 16: Tech billionaire Jeff Bezos is all set to fly to space on the New Shepard rocket with a select few on July 20. It is not known to all that India-born Sanjal Gavande is part of the team that built the New Shepard rocket for Jeff Bezos' space company Blue Origin. Sanjal Gavande, who works as systems engineer at Blue Origin in Seattle, says it was her childhood dream to fly to space which will come true soon. "I am really happy that my childhood dream is about to come true. I am proud to be a part of Team Blue Origin," Sanjal told a leading daily over phone. Sirisha Bandla, Indian-American Astronaut, Become Third Indian-Origin Woman After Kalpana Chawla and Sunita Williams to Fly into Space.

Sanjal Gavande is a 30-year-old systems engineer who is part of the team that built the New Shepard rocket. She is from Kalyan in Maharashtra state of India. She studied till class 10 at Model High School and passed class 12 from Birla College. After completing mechanical engineering from Mumbai University in 2011, Sanjal enrolled at Michigan Technological University for a masters in the subject. She completed her masters in 2013 and joined Mercury Marine in Fon du Lac, Wisconsin. Chinese Astronauts Conduct First Spacewalk Outside New Space Station.

Two years later, Sanjal joined Toyota Racing Development in Orange city, California. In the meantime, she continued taking flying lessons on weekends. On June 18, 2016, she got a pilot’s licence. Sanjal had a setback when she applied at NASA for an engineering job and was not selected. But, she did not give up and applied at Blue Origin. Sanjal finally got the job of a systems engineer at Blue Origin and eventually became part of the team that built the New Shepard rocket.

(The above story first appeared on LatestLY on Jul 16, 2021 01:10 PM IST. For more news and updates on politics, world, sports, entertainment and lifestyle, log on to our website latestly.com).