After saying that he was buying British football club Manchester United, Tesla and SpaceX CEO Elon Musk on Wednesday denied the news and said it is a "long-running joke on Twitter". 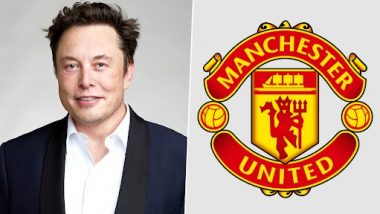 San Francisco, August 17: After saying that he was buying British football club Manchester United, Tesla and SpaceX CEO Elon Musk on Wednesday denied the news and said it is a "long-running joke on Twitter". When asked by a user on the micro-blogging platform if he was serious about buying the club, Musk replied: "No, this is a long-running joke on Twitter. I'm not buying any sports teams."

Earlier, while replying to other users, Musk mentioned he was buying Manchester United. However, it was not immediately clear if Musk was just having fun or was serious about the acquisition. Elon Musk Buying Manchester United? Netizens Splash Twitter With Memes After Tesla CEO Says He’s Purchasing Red Devils.

The American Glazer family owns the club, who purchased it for around 790 million pounds in 2005. The announcement came as he was engaged in a political tweet thread.

"To be clear, I support the left half of the Republican Party and the right half of the Democratic Party!" he posted, before the US midterm elections in November. Musk supporters have asked him to buy Manchester United rather than Twitter in the past.

Manchester United Football Club, commonly referred to as Man United, or simply United, is based in the Old Trafford area of Greater Manchester, England. It is one of the most widely supported football clubs in the world and has rivalries with Liverpool, Manchester City, Arsenal and Leeds United.

(The above story first appeared on LatestLY on Aug 17, 2022 03:55 PM IST. For more news and updates on politics, world, sports, entertainment and lifestyle, log on to our website latestly.com).