The Social Dilemma Review: Why You Should NOT Be Missing This Netflix Documentary That’s More of a Warning to Be Seriously Heeded 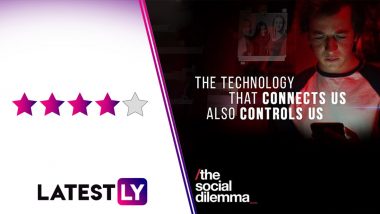 The Social Dilemma Review: You might have been reading tweets of celebs, media personnel and influencers tweeting about The Social Dilemma. After watching this haunting documentary that is streaming on Netflix, you would also come to Twitter, Facebook and/or WhatsApp to talk about The Social Dilemma and ask your friends/followers to watch it. It's then you would realise the sheer irony of it all - that to praise a documentary on the ills of social media, you had to come to social media to come and tell it. 'The Social Dilemma' on Netflix Which Talks About Evils of Social Media Has Impressed Netizens So Much That They Cannot Stop Recommending it... on Social Media!

Written and directed by Jeff Orlowski (Chasing Ice), The Social Dilemma brings former employees of social media giants like Facebook, Google, Twitter, Instagram who left the companies over ethical dilemmas. Joining them are PhD experts and other conscientious tech experts. They are given the platform to talk about how social media has moved from entertaining us to influencing us and is now in the set path to destroying us.

Primary among the speakers is Tristan Harris, former Google design ethicist, who is now the co-founder of Center for Humane Technology. Tristan reveals how when he used to work in Google, he had sent an email asking his colleagues to contemplate over the ethical dilemma over making Gmail so addictive to its users. His proposal became viral within his company, and even reached the top level. Many talked about it. I was reminded of a similar scene in Jerry Maguire, where a titular protagonist, a sports agent, faced similar prick of conscience, and wrote a long email on the ethicality of what they are doing.

Unlike Jerry Maguire, though, who loses his job, Tristan's email was conveniently forgotten a few days later, as people returned to their smartphones. This made him to get to start Center for Humane Technology, that gets social media giants to be more responsible when it comes to user addiction.

Harris, along with other speakers in the documentary, including fellow co-founder Center for Humane Technology Aza Raskin and former Facebook employee Justin Rosenstein, gives many eye-opening and mind-shattering revelations of how these apps work and control you. Some of those, you might have already known is wary; some, you know but have disregarded, and some, you were completely oblivious. Facebook India Official Stopped Action Against BJP Leaders' Hate Speeches Citing Business Reasons, Says WSJ Report.

These former employees claim that sites like Facebook and Twitter were created with the best of interests. Like for example, Rosenstein, who gets the most hard-hitting closing speech of all in the documentary, is responsible for creating the 'Like' button on Facebook. He said that the button was put there to spread positivity, but now we all know what's it used for.

We get to see how apps like Instagram can actually put impressionable teenagers into depression by making them body conscious. We also get to hear how Facebook and Twitter make their AI actually make you dance to their tunes.

Think you control your usage of Facebook? You are wrong. Try resisting the urge to check your phone when that notification tone rings. Like Akshay Kumar says in Ajnabee, 'Everything is planned.' The insights into surveillance capitalism and data mining are terrifying to say the least.

Have you realised that conspiracy theorists are getting way too much platform to speak on? Well, you know who to blame here. Taking the example of Flat-Earthers, The Social Dilemma tells us how such videos get pushed on Facebook and YouTube if the user ever had been searching for them even once.

Watch the Trailer of The Social Dilemma here:

The documentary goes beyond highlighting the rise of conspiracy theorists to troubling psychological implications on social media users' psyche. It talks about something far more dangerous - the advent of hate news and fake news, and how the higher powers are using them to systematically demolish democracies across the world. The Rohingya massacre, earlier covered in shows like Last Week Tonight with John Oliver, is a primary result of how propaganda spread through Facebook can result in massacre of millions.

Most of the incriminating incidents covered in The Social Dilemma pertain to around The States, Russia and Europe. There is a fleeting mention of Muslims being lynched in India due to rise of fake news. But even without the cursory mentions, it is not difficult to dot the i's and cross the t's when it comes to how social media has influence a whole lot of what's happening in India. IT Cell, anyone?

Parallel to these interviews, there is also a fictionalised narrative of a suburban family, whose most of the members are addicted to social media and how they affect each of them adversely. This part, starring Booksmart's Skyler Gisondo, Moonrise Kingdom's Kara Hayward and Mad Men's Vincent Kartheiser, feels like a darker take on Disney's Inside Out, that tries to summarise the point of the documentary. As if the interviews weren't scary enough!

As things conclude, the interviewees do offer tips and suggestions to lessen the hold of social media over us. But the tone in their words suggest that they won't help, unless the awareness is spread across the masses. Otherwise, be prepared for a very bleak ending, that could come to us as nearer as in 20 years!

Another bit of irony - The Social Dilemma is streaming on a platform, Netflix, that itself runs around user-focused algorithms. But that shouldn't stop you watching this hard-hitting documentary, that is both eye-opening and terrifying at the same time. Don't say you have not been warned!

(The above story first appeared on LatestLY on Sep 14, 2020 01:59 PM IST. For more news and updates on politics, world, sports, entertainment and lifestyle, log on to our website latestly.com).