No, Tanu Weds Manu Poster on Netflix India 'Changed' to Kangana Ranaut Holding a Joint Has Nothing to Do With The Recent Drug Scandal in Bollywood! But Here's What it Means

If you're seeing the poster of Kangana holding a joint on your Netflix, then it probably means... (wait for it) that you have been talking, listening, surfing, watching anything related to marijuana. It has all to do with the algorithm and an individual's choices of surfing than a creative play by people at Netflix! 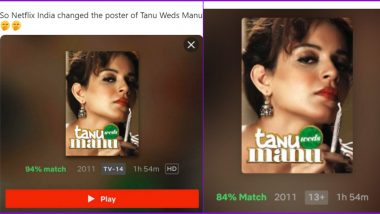 Actress Kangana Ranaut is all over the headlines these days. Her war of words against the Maharashtra government, her views on nepotism and the drug scandal in Bollywood is making it to news every few hours. Connection of Kangana to drug use are also doing the rounds during this political battle. Amidst this, some Twitter users noticed that the poster of her film Tanu Weds Manu on Netflix has been changed to a scene of the actress holding a joint. Right timing, you think? It is important to note, not everyone can see the poster of her holding a joint, but only some. We tell you why.

Some would even call it smart play, but while it is indeed, it has got nothing to do with the actress but your own choices. If you're seeing the poster of Kangana holding a joint on your Netflix, then it probably means... (wait for it) that you have been talking, listening, surfing, watching anything related to marijuana. It has all to do with the algorithm and an individual's choices of surfing than a creative play by people at Netflix! Not just surfing it also means you are consuming more news or content related to the drugs, even if unknowingly.

Almost all social media platforms depend on your individual data to give you related ads or reccomendations. In the last few days, there is a lot of news about drug use in Bollywood, the Rhea Chakraborty arrest for drug use that is dominating the prime time news. Your consumption of such content knowingly or unknowingly could also cater to some of the stuff you see online later on. A very recently released documentary on the same platform The Social Dilemma is a peak into how your social media apps or your general surfing on Google controls your mind eventually. These apps are constantly reading or tapping into your interests, one way in which Netflix gives you the recommendations for yourself. Several people who noticed the Tanu Weds Manu poster on Netflix India tweeted about it and an obvious link to the present day scenario of the drug scandal in Bollywood.

This is How it Looks

So this is how Tanu Weds Manu looks on Netflix. With a joint. pic.twitter.com/Uj3fe6NHni

The "Tanu Weds Manu" poster on Netflix has changed to 🦘holding a joint.

Can we call it "Tanu Weeds Manu" ? pic.twitter.com/XobhFVLbFn

But as much as you would relate it to the drug scandal angle, it isn't. Netflix is known for giving personalised recommendations but their tools may be far more subtle than you can imagine. The change of the poster to actress holding a joint is probably about your interest in marijuana or related content, probably watching too much of such news or discussing it later on through social media apps. An article published by Deadline in 2018 points how manipulative the streaming platform can get in terms of these recommendations. When the issue faced criticism Netflix denied of engaging in such targeting.

A spokesperson was quoted in the same report, "We don’t ask members for their race, gender or ethnicity so we cannot use this information to personalize their individual Netflix experience. The only information we use is a member’s viewing history." But they noted that the thumbnail the viewer sees is based on the kind of shows the subscriber watches. So, similarly the thumbnail or the poster of Tanu Weds Manu that you see on Netflix is based upon your interest in particular content. You can try asking your other friends or try it from a new user and see if it shows the same poster. Smart play by Netflix, but not in a way that you'd expect.

(The above story first appeared on LatestLY on Sep 13, 2020 03:21 PM IST. For more news and updates on politics, world, sports, entertainment and lifestyle, log on to our website latestly.com).