As Russia's war on Kiev continues, Americans have provided Ukrainian President Volodymyr Zelensky "encrypted communications equipment" which can "put him into a secure call" with his US counterpart Joe Biden, a media report has claimed. 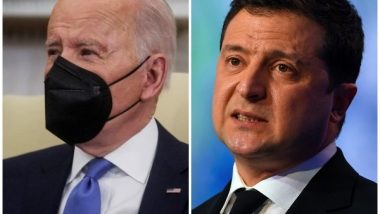 US President Joe Biden and his Ukrainian counterpart Volodymyr Zelensky.

New York, March 7: As Russia's war on Kiev continues, Americans have provided Ukrainian President Volodymyr Zelensky "encrypted communications equipment" which can "put him into a secure call" with his US counterpart Joe Biden, a media report has claimed.

The New York Times report published on Sunday said thatin Washington and Germany, "intelligence officials race to merge satellite photographs with electronic intercepts of Russian military units, strip them of hints of how they were gathered, and beam them to Ukrainian military units within an hour or two". Joe Biden Speaks With Volodymyr Zelensky, Reaffirms US Readiness to 'Respond Decisively' if Russia Further Invades Ukraine.

The report went on to say that as Zelensky "tries to stay out of the hands of Russian forces in Kiev", he "travels with encrypted communications equipment, provided by the Americans". According to The New York Times used the equipment on Saturday to make a 35-minute call to Biden.

The call was focused on what more "the US can do in its effort to keep Ukraine alive without entering into direct combat on the ground, in the air or in cyberspace with Russian forces", the report added.

Although Zelensky welcomed the help so far, he reiterated that the aid was "wildly insufficient" as Russia was advancing towards capital Kiev. The President's other demands include a no-fly zone over Ukraine, a shutdown of all Russian energy exports and a fresh supply of fighter jets.

This report comes after White House Press Secretary Jen Psaki said on March 3 that the US was sharing intelligence with Ukraine "in real time", reports the BBC. She however, did not provide any further details.

(The above story first appeared on LatestLY on Mar 07, 2022 12:53 PM IST. For more news and updates on politics, world, sports, entertainment and lifestyle, log on to our website latestly.com).