The Kingdom of Saudi Arabia (KSA) on Saturday announced that only citizens and residents of the country will be allowed to perform Hajj this year. 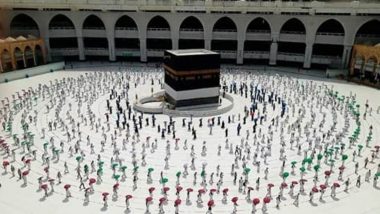 Riyadh, June 12: The Kingdom of Saudi Arabia (KSA) on Saturday announced that only those residing in the country will be allowed to perform Hajj this year. A total of 60,000 pilgrims will be allowed to perform the pilgrimage this year, according to the Saudi ministries of health and Hajj. The decision to limit Hajj pilgrimage has been taken in view of the ongoing coronavirus pandemic, the Kingdom said. Hajj: Rituals And Significance of Annual Islamic Pilgrimage For Muslims.

This is second year in a row that Saudi Arabia has not allowed Muslims coming from foreign countries to perform Hajj. Last year too, Muslims residing in the Kingdom, were only allowed to perform the pilgrimage. This year, the pilgrimage, scheduled to be held at the end of July, would be limited to citizens and residents of Saudi Arabia who have been vaccinated and are below 65 years of age with no chronic illnesses. Hajj 2020 in Photos and Videos: Beautiful Pics of Social Distancing in Hajj 1441 in Mecca Go Viral Online.

“The kingdom of Saudi Arabia, which is honored to host pilgrims every year, confirms that this arrangement comes out of its constant concern for the health, safety and security of pilgrims as well as the safety of their countries," said the Ministry of Hajj and Umrah in a statement. "The Kingdom puts human health and safety first," it added. Saudi Arabia has so far recorded more than 460,000 coronavirus infections, including 7,536 deaths.

Last year, only 1,000 Saudi citizens and residents were allowed to perform Hajj. Prior to COVID-19, around 2.5 million pilgrims, including residents of over 150 countries, used to visit the holiest sites of Islam in Mecca and Medina for the week-long pilgrimage.

(The above story first appeared on LatestLY on Jun 12, 2021 05:50 PM IST. For more news and updates on politics, world, sports, entertainment and lifestyle, log on to our website latestly.com).