‘Iran Will Never Back Down on Red Lines in Vienna Talks’, Says President Ebrahim Raisi

Iranian President Ebrahim Raisi stressed on Tuesday that Iran has not backed down on any of its red lines in the talks on reviving the 2015 nuclear deal and will never do so. 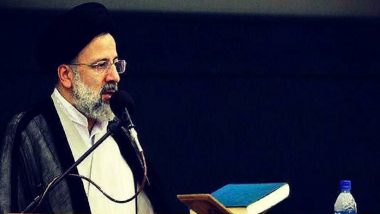 Tehran, March 9: Iranian President Ebrahim Raisi stressed on Tuesday that Iran has not backed down on any of its red lines in the talks on reviving the 2015 nuclear deal and will never do so. Making the remarks in a meeting held in the Iranian capital Tehran, Raisi added that his administration pursued the strategy of "neutralizing the sanctions" with seriousness in the first step, Xinhua news agency reported, citing the Iranian presidency's website.

In the second step, Raisi said, Iran seeks to remove the US sanctions through negotiations, in which full respect for the country has been guaranteed. He noted that his administration is continuing the talks in the Austrian capital of Vienna completely on the principles and framework established by Iran's Supreme Leader Ayatollah Seyyed Ali Khamenei, sticking to its declared red lines.

Iran signed the nuclear deal, formally known as the Joint Comprehensive Plan of Action (JCPOA), with the world powers in July 2015. However, former US President Donald Trump pulled the United States out of the agreement in May 2018 and reimposed unilateral sanctions on Tehran.

Since April 2021, eight rounds of talks have been held in Vienna between Iran and major parties to the JCPOA, namely Russia, China, France, the UK and Germany, in a bid to revive the deal. The US has been indirectly involved in the talks.

(The above story first appeared on LatestLY on Mar 09, 2022 12:35 PM IST. For more news and updates on politics, world, sports, entertainment and lifestyle, log on to our website latestly.com).