The video showed the PIA plane crashing into a densely populated area in Karachi, followed by a blast sound and skies of smoke. 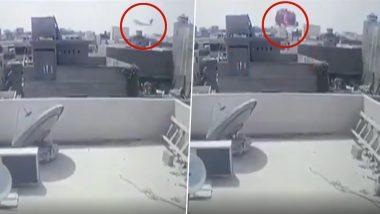 Karachi, May 23: A video purportedly showing Pakistan International Airline (PIA) passenger plane crashing in Karachi has emerged on social media platforms. The video showed the PIA plane crashing into a densely populated area in Karachi, followed by a blast sound and skies of smoke. At least 97 people were killed when PIA A320 passenger aircraft from Lahore to Karachi crashed minutes before landing at the Jinnah International Airport on Friday. PIA Flight Crash: Indian PM Narendra Modi Condoles Loss of Lives in Pakistan Due to Lahore-Karachi Plane Accident.

Before crashing, the PIA plane hit one of the buildings in Jinnah Gardens, Model Colony, located next to the runway of the airport. There was an explosion and within a fraction of second, thick plumes of black smoke rose in the air. The air mishap was captured on a CCTV camera on the roof of one of the houses in the same locality. The PIA plane was carrying at least 90 passengers and nine crew members in the flight PK 8303. PIA Flight Crash: PM Imran Khan, Shoaib Akhtar and Others From Pakistan Cricket Fraternity Condole Deaths, Offer Support to Victims.

While 97 died, two passengers survived the crash. The survivors were identified as Zubair and Zafar Masood, who is the President of Bank of Punjab. "Zubair has 35 per cent burns and is being treated at the Civil Hospital Karachi, while Masood has four fractures and is being treated at the Darul Sehat Hospital," Meeran Yousuf, the media coordinator for the Sindh Health Minister, told Dawn.com.

PIA CEO, Air Marshal Arshad Malik maintained that the plane seemed to have technical issues. "Unfortunately, today a tragic incident has occurred. I can tell this that the last words heard from the pilot were that there was some technical issue. And even though both runways were cleared for landing, the pilot wanted to take another turn," the CEO said. One eyewitness said that the plane first hit a mobile tower before crashing into the houses.

(The above story first appeared on LatestLY on May 23, 2020 08:49 AM IST. For more news and updates on politics, world, sports, entertainment and lifestyle, log on to our website latestly.com).