Japanese Prime Minister Shinzo Abe resigned over health issues on Friday. As per reports, Shinzo Abe wanted to avoid causing problems to the government due to his worsening health condition. 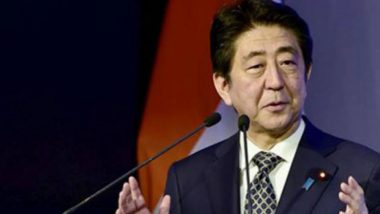 Tokyo, August 28: Japanese Prime Minister Shinzo Abe resigned over health issues on Friday. He made this announcement at a press conference. As per reports, Shinzo Abe wanted to avoid causing problems to the government due to his worsening health condition. Speculation about Shinzo Abe's health and tenure had risen after he made two visits to a hospital recently. He has battled the chronic disease ulcerative colitis for years.

This week on Monday, Abe marked eight years in office and became Japan's longest-serving leader, beating a record set by his great-uncle Eisaku Sato. However, there has been a major dip in his popularity in recent opinion polls over his handling of the coronavirus pandemic and scandals among ruling party members. Shinzo Abe, Japanese Prime Minister, Admitted to Tokyo Hospital for 'Health Check-up'.

According to a Reuters report, Abe suffers from chronic inflammatory bowel disease and had to previously step down as prime minister in 2007 following a flare-up. He returned as the PM after his party registered a landslide election victory in 2012.

Earlier this month, Japan's top government spokesperson Chief Cabinet Secretary Yoshihide Suga, downplayed any potential health issues Abe may be going through "I see the prime minister every day, and I think he has no health problems at all as he has been carrying out his duties smoothly."

(The above story first appeared on LatestLY on Aug 28, 2020 01:52 PM IST. For more news and updates on politics, world, sports, entertainment and lifestyle, log on to our website latestly.com).