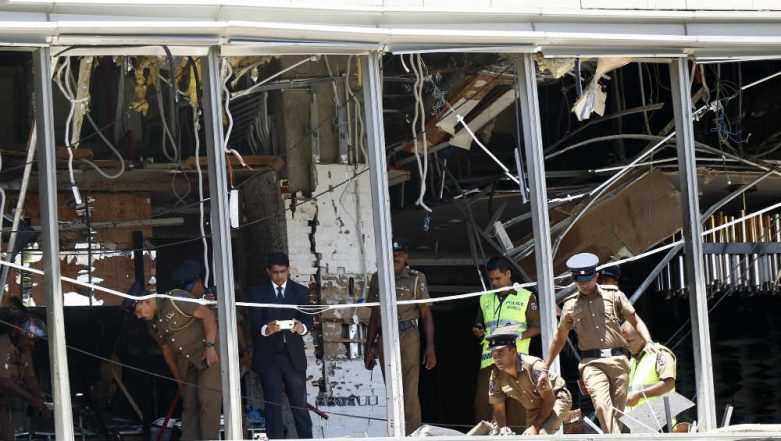 Police and investigators work at a blast scene at Shangri-La hotel in Colombo (Photo Credits: IANS)

Colombo, April 22: A day after eight explosions shook Sri Lanka, the government on Monday ordered a new curfew in Colombo. According to the Sri Lankan government's information department, curfew will be imposed in Colombo from 8 pm tonight till 4 am tomorrow. The death toll climbed to 290 from a series of eight blasts that tore through churches and luxury hotels on Easter Sunday in Sri Lanka.

The government had imposed a country-wide curfew on Monday following explosions. The curfew, however, was withdrawn Monday morning. No group has yet claimed direct responsibility yet of the country's bloodiest attacks in a decade. Among dead, five were Indian nationals, India's Ministry of External Affairs confirmed on Monday. A total of 27 foreigners, including people from Turkey, the US, Britain, the Netherlands, Portugal and China died in explosions. Sri Lanka Bomb Blasts: MEA Reveals Names of Indian Nationals Killed in Suicide Bombings.

There were fears the attacks could spark a renewal of communal violence. According to the news agency Reuters, the police late on Sunday reported a petrol bomb attack on a mosque in the northwest and arson attacks on two shops owned by Muslims in the west.