TV broadcaster NBC announced last May that it will not air the annual awards show, considered a precursor to the Academy Awards, after the Hollywood Foreign Press Association (HFPA) received sharp criticism for its lack of diversity and allegations of corruption. 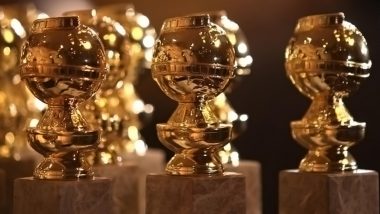 "Succession", a much loved HBO series from Jesse Armstrong, further took home two more awards for series stars Jeremy Strong and Sarah Snook in best performance by an actor in a TV series - drama and best actress in a supporting role TV - drama categories, respectively. The ceremony was held as a private, no broadcast or livestream event sans audience and red carpet appearances at the Beverly Hilton Hotel in Los Angeles in a scaled-down ceremony. Golden Globes 2022: West Side Story, Succession, The Power of the Dog Win Big; Check Out the Full Winner List for the 79th Annual Awards Here.

TV broadcaster NBC announced last May that it will not air the annual awards show, considered a precursor to the Academy Awards, after the Hollywood Foreign Press Association (HFPA) received sharp criticism for its lack of diversity and allegations of corruption. Kenneth Branagh won the best screenplay in motion picture Globe for his black-and-white and semi-biographical film "Belfast".

Will Smith bagged the trophy for best actor in a motion picture drama for his titular role in "King Richard", the father and coach of tennis icons Venus and Serena Williams, while Nicole Kidman was adjudged the best actress in a motion picture - drama for playing the role of American comedy icon Lucille Ball in "Being the Ricardos".

Veteran music composer Hans Zimmer won his third Golden Globe for giving the original score of Denis Villeneuve's "Dune" adaptation. Billie Eilish and Finneas O'Connell landed their maiden golden trophy for the title track of the James Bond film "No Time To Die" in the best original song category. Besides "Succession", "Hacks" emerged as the next big winner in the television segment as the show won the TV series musical/ comedy trophy for HBO Max and earned veteran actor Jean Smart a Globe for best actress in a TV series - musical/ comedy.

O Yeong-su, another veteran actor, won his first Golden Globe for his performance in the best supporting actor in a TV drama for popular Netflix survival drama series "Squid Game". O is the first South Korean actor to earn a trophy at the awards gala. Mj Rodriguez won the award for best actress in a TV series for the final season of the Netflix drama "Pose".