During his two-day trip to Meghalaya last weekend, Shah had held a closed-door meeting with chief ministers of the northeast states. 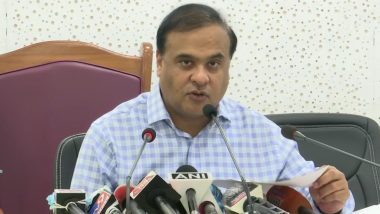 Dispur, July 26: Chief Minister Himanta Biswa Sarma on Monday informed that six jawans of Assam Police have lost their lives while defending the constitutional boundary of state at the Assam-Mizoram border. This came amid tensions between two states over the border dispute.

Expressing condolences, Sarma wrote on Twitter, "I am deeply pained to inform that six brave jawans of Assam Police have sacrificed their lives while defending constitutional boundary of our state at the Assam-Mizoram border. My heartfelt condolences to the bereaved families."

The border dispute between Assam and Mizoram seems to have been resolved after Union Home Minister Amit Shah on Monday spoke to Chief Ministers of both states asking them to resolve the crisis, sources said. Assam-Mizoram Border Tension: 6 Jawans of Assam Police Have Lost Their Lives, Says CM Himanta Biswa Sarma.

A war of words ensued between Mizoram Chief Minister Zoramthanga and his counterpart from neighbouring Assam Himanta Biswa Sarma as the former urged Home Minister Shah to look into the matter and immediately end this crisis. During his two-day trip to Meghalaya last weekend, Shah had held a closed-door meeting with chief ministers of the northeast states.

In reply, Sarma shared a clipping and said a superintendent of police from Mizoram was asking Assam's officials to withdraw from their post, failing which civilians from the neighbouring state would not stop the violence. He too sought immediate intervention of Shah and the Prime Minister's Office (PMO).