The 41-year-old singer also features in the documentary which will be making its debut on streamer Amazon Prime Video, reported Deadline. 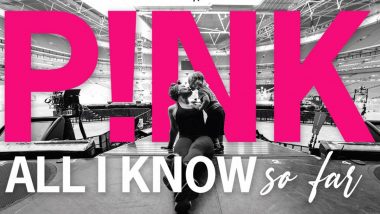 Amazon has announced that "P!NK: All I Know So Far", an upcoming documentary about pop star P!NK, will release on May 21. The 41-year-old singer also features in the documentary which will be making its debut on streamer Amazon Prime Video, reported Deadline. Joe Exotic AKA Tiger King’s New Feature-Length Documentary in Works at BBC Two.

The film shows P!NK as she embarks on her 2019 'Beautiful Trauma' world tour, all while trying to balance being a mom, a wife, a boss, and a performer.

Mixing footage from the road, behind-the-scenes interviews and personal material, director Michael Gracey gives audiences a glimpse of her life. Demi Lovato Reveals She Was Sexually Assaulted by Her Drug Dealer as a Teen in New Documentary

✨MAY 21st. ALL I KNOW SO FAR. Directed by the one and only Michael Gracey. Starring the cutest kids, made by me. I’m in there, too 👩🏼‍🎤

Come jump on the tour bus and see how it really goes. Cause it’s Wembley F*cking Stadium. @PrimeVideo ✨#comingsoon pic.twitter.com/2Ebh4cmNUo

The documentary has been produced by Gracey and Isabella Parish in conjunction with Luminaries, Silent House and Lefty Paw Print.