The community is synonymous with experience, he said. "It means a model for filmmakers all around the world. Except for Hollywood, no one makes films like Bollywood. You developed a whole industry, a star system. You have the biggest award show in the world, the IIFA is going to be happening here in Abu Dhabi on May 20," he added. 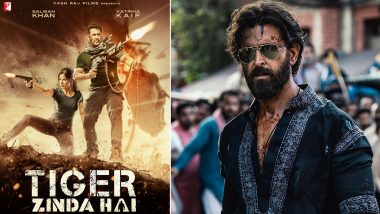 Almost a month before the Abu Dhabi schedule of the upcoming Bollywood film "Vikram Vedha", the team of the movie travelled to the city here to put together a set that resembles the streets of Lucknow, the capital of India's most popular state Uttar Pradesh where the film is based. The Hindi remake of the 2017 Tamil film of the same name, "Vikram Vedha" stars Hrithik Roshan and Saif Ali Khan in the titular roles. Vikram Vedha: Hrithik Roshan Shares Saif Ali Khan's Stunning Cop Look From the Film and Wifey Kareena Kapoor Khan is In Love With It!

But not many would know that the set of another Bollywood star vehicle "Tiger Zinda Hai", featuring Salman Khan and Katrina Kaif, served as the canvas for the crew of "Vikram Vedha". According to Hans Fraikin, Film & TV Commissioner, Abu Dhabi Film Commision (ADFC), the production team built around the 'Tiger' set, as it is now called, in the Backlot to make it look like Lucknow and Kanpur.

The Backlot, which covers 4 mn sq ft (approx 91 acres) with a variety of different sets at Khalifa Industrial Zone Abu Dhabi (KIZAD), is also home to some of the filming locations of the 2017 action spy drama "Tiger Zinda Hai"."'Tiger Zinda Hai' is a huge set. We built around that set, the hospitals, military base, war-torn streets, and village. They transformed four to five streets of the Backlot into Lucknow," Fraikin told PTI here. Roshan shot for the movie in Abu Dhabi three months ago in a month-and-a-half-long schedule, and the commissioner said collaborating with the team was a wonderful experience.

"Hrithik Roshan is such a lovely actor and star, he's really humble and a nice person. The producers and their team were just fantastic. We worked really well together. I think they had a lovely experience here," he added. For a scene, they needed 2,500 extras that must look like they come from Lucknow. "We found them all in Abu Dhabi," Fraikin said earlier. Mini Sarma, Head of Indian Production, ADFC, said the "Vikram Vedha" crew flew to Abu Dhabi almost a month prior to the shoot to get the work on the film set started.

"When the producers (of Vikram Vedha) came and we showed them the place, they loved it. They also felt very comfortable shooting here during the pandemic than shooting in the streets of Lucknow. That's when they decided that they are going to recreate Lucknow in that area. "So 20-25 days prior to the shoot, the art department and the production designers had come in. They changed the facade into the Lucknow streets. When you'll see the film, you can never make out that it was shot in Abu Dhabi," Sarma told PTI. Vikram Vedha Hindi Remake: Saif Ali Khan Wraps Up Second Schedule of Hrithik Roshan Starrer.

Since its inception in 2009, the ADFC has facilitated the filming of not only Bollywood but many movies from across Indian languages at the Backlot.Filmmaker Priyadarshan's 2011 Malayalam film "Oru Marubhoomikkadha" was the first to be shot here, Sarma added. "Then we had Bollywood films like 'Dishoom', 'Tiger Zinda Hai', 'Baby', 'Bunty Aur Babli 2', 'Bharat', 'Saaho', which is again a south Indian film, and 'Race 3'. So we had production teams of all different languages come here," she said.

There are a couple of more Indian films in the pipeline to be filmed in Abu Dhabi. "Discussions are on," Sarma added. Upcoming Bollywood film "Heropanti 2" is one of the other projects that was shot here in Abu Dhabi.Bushra Mehdi, CEO, Red Films and Studios, said, "We have done the whole production for 'Heropanti 2' here." Red Films and Studios is one of the partners at the ADFC and the Abu Dhabi government. It is based at twofour54, the media free zone that offers solutions for doing business in one of the world's fastest growing media markets.

From permissions, locations, production, hotel stay, travel tickets to the 30 per cent cash rebate by the ADFC, Mehdi said her company helps producers in shooting in Abu Dhabi. "We also produce our own content with producers and OTT platforms. We also did the Dabangg show in Saudi Arabia for Mr Salman Khan three months ago and 85,000 people turned up to see him. We did the Dabangg Dubai show for them as well," she told PTI.

Her company has also produced the music video of "Balam Ka System" with Fazilpuria and they are producing one song with Honey Singh as well in Abu Dhabi, Mehdi added. From modern bridges like Mussafah Bridge, heritage sites like Sheikh Zayed Grand Mosque and Louvre Abu Dhabi to deserts, the city has the best to offer. "Deserts are the best in the UAE. We have roads for action. We have everything in Abu Dhabi," she said. Commissioner Fraikin also highlighted the importance of the Indian filmindustry for the ADFC.

Tiger Zinda Hai Set in Abu Dhabi Was Transformed Into Lucknow for Vikram Vedha Remake"If anybody, especially young crew, that want to get some international experience working on film and entertainment sets in Abu Dhabi, whether it's Bollywood or anything else, just contact the film commission," Fraikin said.