According to People magazine, the 49-year-old business magnate was joined by his mother, model Maye Musk and Grimes, who is the mother of their son X AE A-Xii. 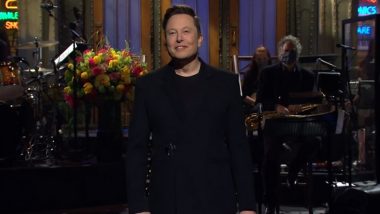 While hosting the 'Saturday Night Live' show, SpaceX founder and Tesla CEO Elon Musk revealed that he has Asperger's syndrome. According to People magazine, the 49-year-old business magnate was joined by his mother, model Maye Musk and Grimes, who is the mother of their son X AE A-Xii. While hosting 'SNL' Musk said, "It's an honour to be hosting Saturday Night Live. I mean that. Sometimes after I say something, I have to say I mean that so people really know I mean it. Elon Musk’s Saturday Night Live Gig Brings Rating Lift to the Late Night NBC Show.

That's because I've always had a lot of intonational variation when I speak, which I've been told makes for great comedy." He added, "I'm actually making history tonight as the first person with Asperger's to host SNL. Or at least the first to admit it." Later in his monologue, he shared how his "vision for the future includes renewable energy and humanity must become a multi-planetary space bearing civilization." Saturday Night Live: Elon Musk Says Cast Has Been Awesome as He Preps to Host.

He poked fun at his previous tweets, joked about how his son's name is pronounced like a "cat running across the keyboard" and pointed out that he "reinvented electric cars and is sending people to Mars on a rocket ship." As per People magazine, the 33-year-old singer Grimes appeared in a 'Super Mario'-themed sketch, for which she portrayed Princess Peach while Musk played Wario.

For the Musk-hosted episode, NBC aired SNL via a global YouTube livestream for the first time to allow international fans the opportunity to watch at the same time as U.S. audiences. For many, Musk was a surprising choice of host for SNL, which typically taps comedians, actors and musicians for the role. His controversial takes on the COVID-19 pandemic and anti-union sentiments caused many to denounce the decision.

Several 'SNL' cast members also appeared to react to the hosting announcement unfavourably, with Bowen Yang previously sharing a frowning face on his Instagram Story as news of Musk's hosting gig was announced. Asperger's syndrome is an autism spectrum disorder. A person with this condition may have social difficulties but has strong verbal and cognitive skills.