27 last year prior to a disciplinary hearing. 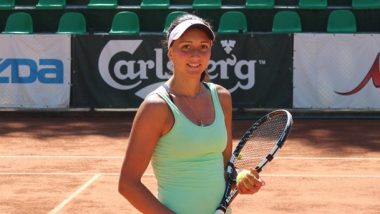 London, November 21: The Tennis Integrity Unit has banned Bulgarian player Aleksandrina Naydenova for life and fined her $150,000 for match-fixing offenses. Naydenova “had partaken in match-fixing activity multiple times between 2015 and 2019,” the anti-corruption body said in a statement Friday.

The 28-year-old Naydenova, whose highest WTA singles ranking was 218, had been provisionally suspended Dec. 27 last year prior to a disciplinary hearing. The TIU said Naydenova committed 13 breaches of the Tennis Anti-corruption Program with 12 of them relating to match-fixing and one relating to “several incidents of non-cooperation” with the investigation. Ronald Koeman Uncertain About Lionel Messi’s Future in Barcelona, Says ‘Nobody Knows What Will Happen’.

The sanction means that Naydenova “is permanently prohibited from playing in or attending any tennis event authorized or sanctioned by the governing bodies of tennis.”