Deputy Permanent Representative - Political Coordinator R Ravindra said on Monday that the only accountability for acts of terror and strong measures against states that support terrorism can strengthen the credibility of the global fight against the scourge. 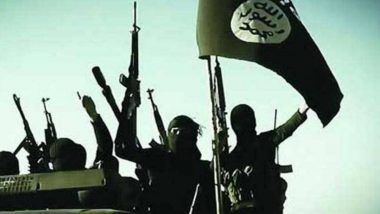 United Nations, May 12: India has told the UN Security Council that the Islamic State is not just another regional terrorist outfit but a global syndicate with affiliated groups across the world, including in the country's neighbourhood.

Deputy Permanent Representative - Political Coordinator R Ravindra said on Monday that the only accountability for acts of terror and strong measures against states that support terrorism can strengthen the credibility of the global fight against the scourge.

"The Islamic State in Iraq and the Levant (ISIL) has carried out inhuman atrocities against the people of Iraq. Victims of ISIL's horrific crimes also included 39 Indian nationals,” he said at the Security Council briefing on Investigative Team to Promote Accountability for Crimes Committed by Da'esh/ISIL (UNITAD). Israel-Palestine Conflict: India Deeply Concerned at Violence in Jerusalem's Temple Mount, Evictions in Sheikh Jarrah & Silwan Neighbourhoods.

ISIL, also known as ISIS (Islamic State of Iraq and Syria), is a jihadist group with a violent ideology that calls itself a caliphate and claims religious authority over all Muslims

Ravindra said ISIL has systematically committed genocide, torture, rape, slavery and kidnapping throughout the territory under its control in Iraq and Syria.

"The Islamic State, therefore, cannot be seen as just another regional terrorist outfit. It is a global syndicate with affiliated terrorist groups across the world, including in our neighbourhood,” he said.

Ravindra stressed that India strongly believed that “the credibility of our collective fight against terrorism can be strengthened only when we ensure accountability for the grave and inhuman acts of terror committed by terrorists and take strong measures against states that encourage, support and finance terrorism.”

Special Adviser and Head of the United Nations Investigative Team to Promote Accountability for Crimes Committed by Da'esh/Islamic State in Iraq and the Levant, Karim Asad Ahmad Khan told the Council that based on its independent criminal investigations, UNITAD has established “clear and convincing evidence that genocide was committed by ISIL against the Yazidi as a religious group.”

He said the team has also established that numerous other international crimes were also committed against the Yezidi community, including extermination, enslavement, sexual violence, forcible transfer, persecution on religious and gender grounds, and conscription of children into an armed group.

“Yazidi children were in many cases directly targeted and disproportionately impacted by Da'esh's crimes. Anyone who escaped alive, but particularly children, carry daily the burden of the lasting effects of these crimes,” he said.

Ravindra said terrorists and terrorist groups affiliated with ISIL have committed crimes against humanity in an unprecedented manner.

“The perpetrators of these crimes should be brought to justice by their respective countries of origin. Sharing of information and evidence collected by UNITAD with other member states will further strengthen these efforts,” he said.

Noting that the full realisation of UNITAD's mandate would not be possible until the team is able to share its large volumes of evidence with the Iraqi authorities, Ravindra termed it “unfortunate” that despite a lapse of almost three years, UNITAD has been unable to service its primary client to the fullest extent possible.

"Delay in sharing of evidence will further delay justice to those victims and their loved ones, whose lives have been devastated by the atrocities committed by ISIL,” he said.

Ravindra said accountability for crimes committed by ISIL, especially those against various minority communities in Iraq, was critical for achieving smooth reconciliation and sustained peace in Iraq. Indian Woman in Israel Killed in Rocket Attack by Palestinian Militants from Gaza.

India has welcomed the adoption of the Yazidi Female Survivors Law, implementation of which and the recent Sinjar agreement will help Iraq move closer to achieving justice for the victims, contribute to restoring normalcy in the lives of Yazidi survivors, enhance their quality of life and pave the way for their safe return.

“The people of Iraq have made immense sacrifices in their fight against ISIL. Justice would not be delivered to them until those responsible for the atrocities carried out are held to account. The full implementation of UNITAD's mandate would contribute to securing justice for the survivors in Iraq and beyond. India stands ready to offer its support to UNITAD,” he said.

“India has been highlighting the serious threat to international peace and security emanating from the acquisition of weapons of mass destruction by ISIL and other terrorist groups and the need for greater international co-operation to prevent it,” he said.