Auto Expo 2020: MG Gloster Luxury SUV & MPV G10 Showcased; Gloster Expected To Be Launched in India By Second Half of This Year

The luxury SUV or the full fleged SUV segment is already ruled by the likes of Toyota Fortuner, which since its launch became favorite for the segment lovers. 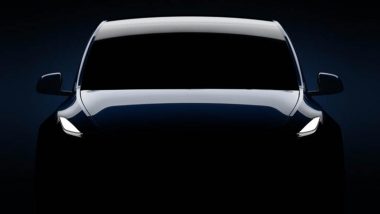 New Delhi, Feb 7: After succesfully taking on Tata's Harrier in the compact SUV segment, the Morris Garages (MG) on Friday brought its first luxury SUV in India, the MG Gloster. The Gloster once launched will directly compete with the segment leader Toyota Fortuner and Ford Endevour. The price for the Gloster have not yet been unrevealed, as it is expected to reach the showrooms only in the second half of the year.

"The launch of Gloster will mark our entry in the luxury SUV segment. "We are confident that, with its best-in-class features, specifications and performance, the GLOSTER will be a benchmark for luxury SUVs in India with its launch later this year," Chaba added.

The luxury SUV or the full fledged SUV segment is already ruled by the likes of Toyota Fortuner, which since its launch became favorite for the segment lovers. Another SUV that has been popular in the segment is Ford Endevour which has been in market for over a decade now and has witnessed various facelifts during the period. At Auto Expo 2020, the carmaker also showcased a total of 14 advanced vehicles across hatchback, sedans, and utility vehicle segments.

Participating for the first time at the prestigious industry event, the MG has reinforced itself a future-forward brand with showcase of Marvel-X, Vision I Concept, E200 and eMG 6 amongst others. The automotive gaint also revealed its luxury full sized Multiple Purpose Vehicle (MPV) G10. The vehicle is already sold globally in markets such as Australia, New Zealand, Middle-East, South American countries, including Chile, Peru and ASEAN such as Malaysia.

G10 comes with various seating configurations, panoramic sunroof, touch-free smart sensing rear door and smart automatic sliding doors that deliver a more convenient experience for passengers. G10 will take on KIA's recently launched Carnival, which has already left the market abuzz with the features and space that it has to offer.

(The above story first appeared on LatestLY on Feb 07, 2020 02:41 PM IST. For more news and updates on politics, world, sports, entertainment and lifestyle, log on to our website latestly.com).