The report further adds that Tesla India Motors and Energy Private Ltd, which has incorporated itself in Bengaluru, on January 8. Vaibhav Taneja, Venkatrangam Sreeram, and David Jon Feinstein are directors of the incorporated entity. 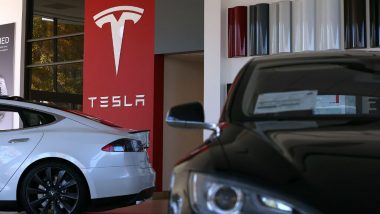 In December 2020, Union Minister Nitin Gadkari had said that Tesla is set to start its operations in India in 2021 and would also look at setting up a manufacturing unit based on demand. "American auto major Tesla will have its distribution facility (sale centres) for its cars in India from next year and considering the demand it would look into setting up of manufacturing here. India has the potential to become the largest EV (electric vehicle) producer in the world in the next five years," Gadkari had said. Tesla to Start Operations in India by Early 2021; Model 3 to be Launched by June Next Year: Reports.

Take a Look at the Tweet by one Tesla Fan Club in India:

BREAKING : @Tesla has been incorporated in Karnataka, India on January 8, 2021 as "TESLA INDIA MOTORS AND ENERGY PRIVATE LIMITED"🇮🇳.

Welcome @elonmusk , we are waiting for official launch⚡#TeslaIndia🇮🇳 #TCIN pic.twitter.com/a5mMY5P84s

Gadkari has been pushing for green fuel and electric vehicles for cutting India's huge Rs 8 lakh crore crude imports. Tesla Inc. co-founder and chief executive Elon Musk had in October said the company will enter the Indian market in 2021.

(The above story first appeared on LatestLY on Jan 12, 2021 08:04 PM IST. For more news and updates on politics, world, sports, entertainment and lifestyle, log on to our website latestly.com).