#8YearsofBolBachchan: Ajay Devgn Celebrates the Journey with Abhishek Bachchan and Rohit Shetty, Prachi Desai Taunts Him for Being 'Selective' in his Tweet

Ajay Devgn earlier took a trip down the memory lane to celebrate 8 years of Bol Bachchan with Abhishek and Amitabh Bachchan. He, however, forgot or ignored to mention the rest of the film's cast in his tweet celebrating the film's anniversary. 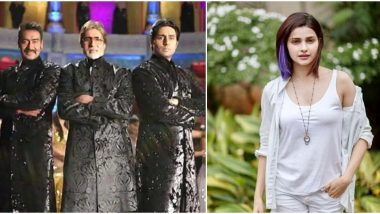 It's been eight years since Rohit Shetty's Bol Bachchan with Abhishek Bachchan and Ajay Devgn had hit the screens and its lead stars are busy celebrating the milestone for all the good reasons. While the Refugee actor is already admiring his 20-year-long journey in the industry, Ajay took to his Twitter account to mark Bol Bachchan's anniversary especially. He shared a picture with Abhishek, Rohit and Amitabh Bachchan (who had a special appearance) to celebrate the occasion but forgot or probably ignored the rest of his team. Neena Gupta Reveals That Rohit Shetty Did Not Inform Her About Removal From Akshay Kumar's Sooryavanshi

Ajay's co-star, Prachi Desai was certainly disappointed to see his 'selective' tagging in the tweet. The Kasam Se actress took to her Twitter account to taunt the Singham actor for forgetting to mention the rest of the cast like Asim, Krushna Abhishek and her in his same tweet. "Hey @ajaydevgn looks like you forgot to mention the rest of aka #Asin @Krushna_KAS @apshaha#Asrani ji #NeerajVohra ji #JeetuVerma yours truly & everyone involved in making this baller of a film #8YearsOfBolBachchan," she tweeted while voicing her sheer disappointment. Ajay Devgn and Abhishek Bachchan to Collaborate for a Project Based on Real Events - Read Details.

Hey @ajaydevgn looks like you forgot to mention the rest of us aka #Asin @Krushna_KAS @apshaha #Asrani ji #NeerajVohra ji #JeetuVerma , yours truly & everyone involved in making this baller of a film 🙂 #8YearsOfBolBachchan https://t.co/8PpnjnFNad

Prachi's disappointment comes in weeks after Vidyut Jaamwal and Kunal Kemmu voiced their frustration on being sidelined in the industry. After Sushant Singh Rajput's tragic demise, the gap between the outsiders and insiders has widened in the industry and the scenario's becoming a little toxic. The situation further got highlighted when Vidyut and Kumal didn't receive an invitation to join Alia Bhatt, Ajay Devgn, Akshay Kumar and Abhishek Bachchan in their virtual press conference to announce the direct OTT releases of their upcoming films.

We hope Ajay takes note of his error and rectifies it at the earliest.

(The above story first appeared on LatestLY on Jul 06, 2020 06:00 PM IST. For more news and updates on politics, world, sports, entertainment and lifestyle, log on to our website latestly.com).