Actor Atul Kulkarni Feels Great Films Are All About Teamwork 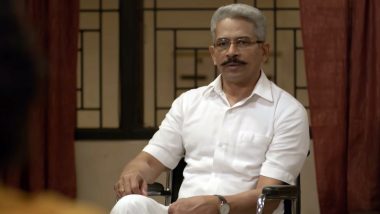 Filmmaking is a collaborative effort and good collaborations result in great projects, says National Award-winning actor Atul Kulkarni. Talking about the same, Kulkarni told IANS: "I have always believed that filmmaking is about collaboration. It is never about one person dictating everyone whoever that maybe, be it the director or the actor or anyone. When that collaboration works in an excellent way, something like City of Dreams comes out." Atul Kulkarni Opens Up About His Character in City of Dreams Season 2.

On the work front, Kulkarni's latest release is the second season of the political drama web series 'City of Dreams' for which he has collaborated with noted filmmaker Nagesh Kukunoor. "Nagesh and I have been old friends. We have been watching each other's work and talking about it and wanted to work with each other since long. When the opportunity came, both of us were extremely happy to collaborate," said the actor. Faraar Kab Tak: Atul Kulkarni Hopes Viewers Learn From His New Crime Show on Ishara TV.

In the second season of the show, Kulkarni reprises his role of Ameya Rao Gaikwad from Season one. Throwing light on how the story progresses in Season two, the actor said: "In the first season, Ameya was a man who was the patriarch, who was the most powerful person of the state and he was in coma for almost 80 per cent of the time. But he was that powerful a man, that despite being in coma, everything was revolving around him and everyone was thinking what would happen once he gets up. In the second season, here is a man who has lost his power, his money and his son. Physically also he is handicapped and his daughter is challenging him in a big way. That's where it begins!"

The series deals with a power play between the father-daughter duo of Ameya Rao Gaikwad and Poornima Gaikwad (played by Priya Bapat). The actor says power struggle was there since the inception of humanity and will always be there. "The concept of power is there ever since human beings came onto this earth. It is a very basic instinct to control, to have power and it doesn't necessarily need a political scenario. Even in a small family of 3-4 people, you can see glimpses of power struggle and who controls whom. It's very natural. It has been relevant and will be relevant all the time," he expressed.

For more than a year now, our lives have been affected as the world battles Covid-19. What lesson did the pandemic teach him? "What I have learnt is that we need more empathy, we need to open our eyes wide as to what is going to happen 10-12 years from now and the repercussions that we are going to face as a society. What I have experienced as an individual, absolutely does not matter. But I think as a society, we need a very encompassing point of view in whatever we do for the next 10-15 years," Kulkarni suggested. Also starring Sachin Pilgaonkar, Eijaz Khan, and Sushant Singh, 'City of Dreams' Season 2 streams on Disney+ Hotstar.

(The above story first appeared on LatestLY on Jul 31, 2021 11:31 PM IST. For more news and updates on politics, world, sports, entertainment and lifestyle, log on to our website latestly.com).