Alia Bhatt shares an adorable picture of Ranbir Kapoor from his birthday celebrations and it will warm the hearts of everyone, including his haters. 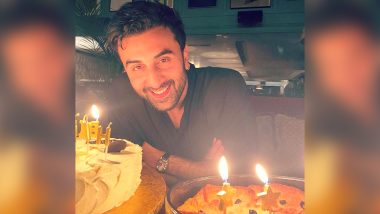 Today is Ranbir Kapoor's birthday. We feel he is perhaps the best actor the Kapoor Khandaan has ever produced, including Raj Kapoor. No offense meant to the legend or his fans, but it's just what we feel. The actor has a certain realism in his act and always picks movies that show a certain side of his craft. So while people just can't get over him being a star kid, we choose to only see the fact that nepotism in this instance has given us a great actor. Wishes have poured in for the actor from all sides who is known to have a secret Instagram account that keeps an eye on everyone. We were waiting when his girlfriend Alia Bhatt would wish him and she finally did. It is one of the warmest pictures of the actor and we are so glad Alia shared this. Riddhima Kapoor Birthday: Alia Bhatt and Ranbir Kapoor Dance Together in a Cute Surprise Video; Kareena Kapoor Khan, Karisma Kapoor Attend the Bash (View Pics)

The picture has Ranbir looking slightly drowsy. Perhaps it was taken at 12 in the night to usher in his birthday. A cute smile and such warmth on his face look eye-catchy.

Ali and Ranbir have spent a few days together when the lockdown first began. He even gave her a haircut during that time.

(The above story first appeared on LatestLY on Sep 28, 2020 06:27 PM IST. For more news and updates on politics, world, sports, entertainment and lifestyle, log on to our website latestly.com).