While Armaan has provided the leading vocals, Amaal has reprised the new version with Kunaal Vermaa penning the lyrics. 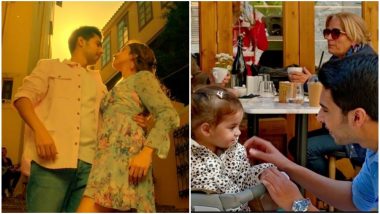 Aren't we tired of Bollywood remaking the shit out of some very popular old songs? Recently the makers of Baaghi 2 received a lot of flak for recreating iconic Madhuri Dixit song Ek Do Teen from Tezaab, picturised on Jacqueline Fernandez. Not only was the idea silly, but nothing about the recreated version, be in the music, singing and the choreography, was appealing enough. So when cousins, singer Armaan Malik and composer Amaal Mallik, revealed that they are working on a single that is a recreated version of Ghar Se Nikalte Hi, we were worried.

Now that the track is out, let me assure you that the cousins have not ruined the song. In fact, it is just as mellifluous as the original with the lyrics changed (for the better? I wasn't exactly a fan of the original lyrics though I loved the song). The purist might still hate it, but this is a much much better version than that of Jacqueline's Ek Do Teen and Ok Jaanu's Humma Humma.

While Armaan has provided the leading vocals, Amaal has reprised the new version with Kunaal Vermaa penning the lyrics. The original song was composed by Rajesh Roshan and was sung by Udit Narayan for the 1996 movie Papa Kehte Hai.

Interestingly Amaal is not a huge fan of the culture of remaking songs and has refused many such opportunities in the past. In an interview to HT, he had said, “There’s an overkill of remakes. I myself have refused quite a few remakes this year alone. I don’t want to do a song remake just for the heck of it. The song has to make sense in the film’s plot. I mean, it will make complete sense to use a song from any of Sanjay Dutt’s previous films in his biopic. But one shouldn’t do a song remake just because it’s a trend or it will make money.”

Armaan meanwhile said that their version was more of a tribute to the original. “It’s our job to do good music. I have done my share of good recreations, like Pyaar Maanga hai and Aise Na Mujhe Tum Dekho. They didn’t receive flak, because they were well-treated. The recreation should do justice to the original. Amaal’s and my version is more like a tribute, and it has been done differently from the original, and I am sure it will touch people’s hearts,” he said.

So how did you find the new version of Ghar Se Nikalte Hi? Share your thoughts below.

(The above story first appeared on LatestLY on Apr 04, 2018 10:43 PM IST. For more news and updates on politics, world, sports, entertainment and lifestyle, log on to our website latestly.com).