Anushka Sharma and Virat Kohli Munch on Desi Food at an Eatery in Guyana and the Pictures Are Sweet! 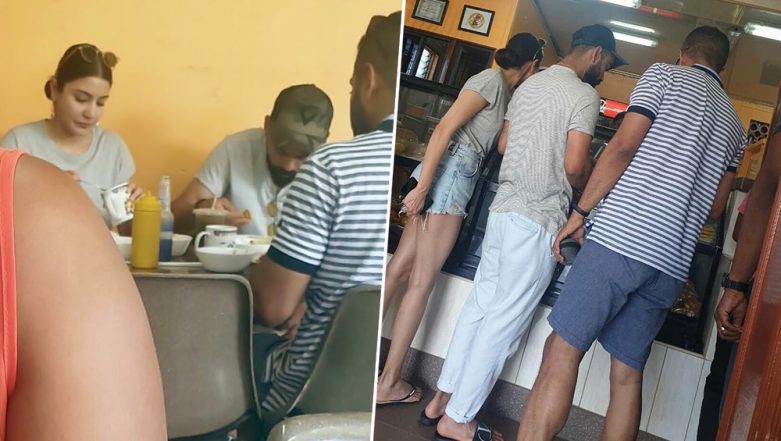 Anushka Sharma and Virat Kohli are right now are on the travel spree, owing to the upcoming India vs West Indies 2019 tour. The power couple always makes sure to make hearts go gaga over them with their pictures from their stay abroad. The recent bunch of pics is from Guyana, where the Bollywood actress and the cricketer were seen having a desi lunch! Anushka Sharma and Virat Kohli's Latest Pics With Friends and Fans in Florida Are Pretty.

In these pictures, we can see them dining at an Indian eatery named Shanta's-The Puri Shop. Virat even posed along with the menu hoarding of the restaurant along with Anushka and posted it with the caption, "top meal with my lovely."

Thanks to the dedicated fan clubs, the star husband-wife pair was clicked choosing from the menu and later munching on the delicacies at the place. They also obliged a fan with a selfie. Check out the pictures below.

Power Couple With a Fan

On the work front, Anushka is yet to announce her next filmy project post Shah Rukh Khan starrer Zero. She played a scientist with cerebral palsy in the flick and her performance was lauded, though the film tanked. However, the actress made it clear that she now needs break from her choc-o-bloc schedule and has refrained her team from showing her scripts as well. The fans definitely have a long wait ahead before the diva announces her next film.