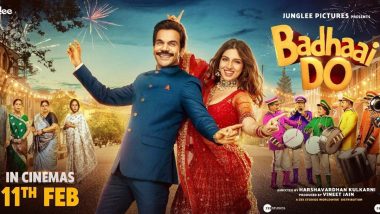 Rajkummar Rao and Bhumi Pednekar-starrer Badhaai Do was released in the theatres on February 11. And, well just after after the movie dropped, reviews of the family entertainer is out. The movie is directed by Harshavardhan Kulkarni and written by Suman Adhikary and Akshat Ghildial. The flick sees Rao as a police and Pednekar as a physical education teacher. The story of the comedy drama revolves around a married couple essayed by Rao and Pednekar, their quirky challenges after marriage and a sweet LGBTQ+ love tale. Theatrical Releases of the Week: Rajkummar Rao-Bhumi Pednekar’s Badhaai Do, Halle Berry-Patrick Wilson’s Moonfall, Vishnu Vishal’s FIR and More.

The synopsis of the movie reads, "Badhaai Do is a complete family entertainer, with a twist! Set in between two crazy, middle-class clans, two unlikely people meet, and their marriage starts throwing them into one comic situation after another. Amidst finding themselves in several goof-ups, they emerge out forming strongest of bond in their unusual relationship."

Check out some of the top reviews by the critics below:

Hindustan Times: "The first half of Badhaai Do shows the teething troubles Rajkummar and Bhumi face while staying together as a married couple and connecting with their real personalities and partners, while the second half shifts focus on how they try to de-stigmatise and normalise homosexuality for their families. Here, I must mention that the director didn't try to please everyone and made viewers forcefully understand and accept the reality of Shardul and Sumi."

Times of India: "Badhaai Do attempts to normalise the big-screen depiction of the gay and lesbian community and their romantic relationships. The complexities of marriages, middle-class traditional families and their demands from individuals have also been shown with sensitivity and realism. The beauty of the narrative lies in the fact that there is no judgment - the characters are not treated differently because they’re gay. From the word go, the film treats the lead pair’s sexual orientation as matter-of-factly as possible."

India.com: "With Rajkummar Rao’s brand of cinema, you are always in for some meaningful entertainment. Bhumi, too, has created a niche for herself by presenting stories that drive social change. In Badhaai Do, they both team up to take the conversation around homosexuality a step ahead and do that beautifully. While Rajkummar is delightful as Shardul, a ‘homo-cop’, Bhumi is the woman who is constantly juggling between being a rebel and an ideal woman who is always taught to keep everyone happy around her. When they meet, they feel liberated and that’s probably the only relationship they have – a bond of freedom – they can be who they are when they are together, unapologetically and uninhibitedly." Badhaai Do Song Gol Gappa: Rajkummar Rao-Bhumi Pednekar’s Cute Expressions And Dance Moves Are Fun To Watch In This Peppy Number (Watch Video).

Pinkvilla: "At the heart of it, Badhaai Do is a coming out of the closet story for a gay and lesbian individual. Kulkarni largely treats it with compassion but also does not shy away from showing the realities and acceptance in modern-day India's tier-2 and tier-3 cities. Be it living your own truth or legalising adoption for the LGBTQIA community, Badhaai Do strives to start a conversation but shines light on the actuality that we have a long way to go by holding a mirror to the society."

The Indian Express: "Just what makes two people decide to tie the knot? There are marriages of all kinds. Love. Arranged. And Arranged-cum-Love, which happens only in India. ‘Shaadi toh compromise hai (marriage is a compromise)’, says Shardul Thakur in ‘Badhaai Do’: by then, his family knows exactly what ‘compromise’ he is talking about, leading to consternation all round. Shardul (Rajkummar Rao) and Sumi Singh (Bhumi Pednekar) have got together in holy matrimony for good reasons of their own. The small town they live in has very little understanding of same-sex love or ‘samlaingikta’."

Firstpost: "The film, however, has a sympathetic, if simple glaze of a solution, and merely points at hope as the way forward. This involves smiling at the camera, rousing music played up, a comforting pat before we are lulled out of the film and out of the theatre, charmed but not convinced. I go back to what Sumi tells Shardul, “Yaar koi samajhta nahi… Aur samjhana kyun hai?” Why should it be explained? Let it be lived, instead."

So, after reading the above reviews, are you planning to watch Badhaai Do at the theatres near you? Tell us in the comment section below.

(The above story first appeared on LatestLY on Feb 11, 2022 09:58 AM IST. For more news and updates on politics, world, sports, entertainment and lifestyle, log on to our website latestly.com).