Badshah on Khandaani Shafakhana: ‘The ’Harami’ Part of the Character Stayed with Me’ – Watch Video

Badshah, Varun Sharma and Sonakshi Sinha are going town promoting their upcoming film, Khandaani Shafakhana. In a conversation with LatestLY, Badshah was at his candid best. He talked about how he had troubled detaching from his character. 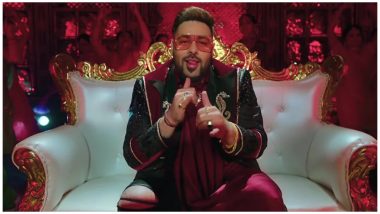 Bollywood's favourite rapper Badshah is making his acting debut with the upcoming comedy, Khandaani Shafakhana. In an interview with LatestLY, the newbie actor discussed how he had trouble switching off from his character off the screen. Sonakshi Sinha, his co-star in the movie, said that she is blessed to possess the ability to switch on and off very easily from the characters she plays. But Badshah said that the 'harami part' of his character in the film stayed with him. Varun Sharma, his co-star, added that its 'harmless harami'. Of course, the moment has left us in splits. Badshah Creates World Record With His New Song 'Paagal'; Here’s How!

"Sometimes you give something to the character, and sometimes you take something from the character. You have taken" Sonakshi took a jibe at Badshah. Khandaani Shafakhana Song Sheher Ki Ladki: Raveena Tandon and Suniel Shetty Steal the Show With Diana Penty In This Groovy Remake of Their 90s Track (Watch).

Check out the full interaction with Badshah, Sonakshi Sinha and Varun Sharma below:

Well, Badshah is not the first actor who had trouble wit detaching with a character he played on screen. In the very recent past, when Ranveer Singh played the role of Alauddin Khilji, in Sanjay Leela Bhansali's Padmaavat, he had to seek a therapist to get over the effects of the role. Late actor Heath Ledger also found himself all consumed by Joker, the character he played in Christopher Nolan's The Dark Knight.

Khandaani Shafakhana, directed by Shilpi Dasgupta, has been produced by  Sundial Productions and T-Series. The movie is cheduked to release in India on August 2.

(The above story first appeared on LatestLY on Jul 13, 2019 01:03 PM IST. For more news and updates on politics, world, sports, entertainment and lifestyle, log on to our website latestly.com).