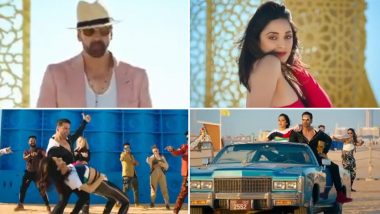 The first teaser of the song "Burj Khalifa" from the upcoming film Lamxmi Bomb will drop online on Sunday. We heard the first glimpse of the song in the trailer of the film. Now, a teaser for the dance number has been released online. Akshay Kumar and Kiara Advani groove to the beats of the number against the backdrop of UAE's landscapes. Well, they have called the song "Burj Khalifa". It will be weird to see them dancing against the backdrop of Taj Mahal, you see. Akshay Kumar On Laxxmi Bomb Clashing With Salman Khan's Radhe: 'Not My Career’s First Clash and Won’t Be the Last'.

From the audio, that we hear in the teaser, the song doesn't sound impressive. Maybe there is more in store for us when the full number releases. Anyway, we have rarely cared about musical sensibilities. "Hookah Bar" from Khiladi 786 is one of the many bad songs that are super popular. Akshay Kumar's Laxmmi Bomb Trailer Records 70 Million Views In 24 Hours; Becomes The Most Watched Trailer In India.

The song is composed by Tanishk Bagchi.

Laxmmi Bomb is a remake of the Tamil film Muni 2: Kanchana. It is directed by Raghav Lawrence, who was also at the helm of the original, and produced by Shabinaa Khan and Tusshar Kapoor. It is slated to release on November 9 on Disney+ Hotstar.

(The above story first appeared on LatestLY on Oct 17, 2020 04:47 PM IST. For more news and updates on politics, world, sports, entertainment and lifestyle, log on to our website latestly.com).