Did You Know Kranti Redkar, NCB Officer Sameer Wankhede’s Wife, Had Made Her Bollywood Debut Opposite Ajay Devgn?

Kranti Redkar is popular in the film industry. The gorgeous wife of Narcotics Control Bureau officer Sameer Wankhede had made her acting debut with a Marathi film. 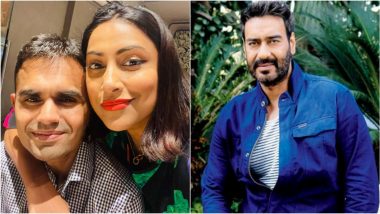 Narcotics Control Bureau (NCB) officer Sameer Wankhede has been making headlines all over again after he arrested Shah Rukh Khan and Gauri Khan’s son Aryan Khan after a drug raid was conducted on Cordelia Cruise on October 2. But this NCB officer had topped headlines even before this and that was when he was investigating Sushant Singh Rajput’s death case. Well, he has handled many high-profile cases in the past and it has become one of the biggest discussions. Apart from Sameer, there’s one more person who has grabbed the nation’s attention and it is his wife Kranti Redkar, who is a part of the showbiz world. Drugs Case: Aryan Khan, Arbaz Merchant and 6 Others Sent to Judicial Custody for 14 Days.

Kranti Redkar is popular in the film industry. The gorgeous wife of NCB officer Sameer Wankhede had made her acting debut with a Marathi film Soon Asavi Ashi in which she was paired opposite Ankush Choudhary. And then it was in 2003 when she had made her Bollywood debut opposite Ajay Devgn with the film Gangaajal. She had played the character named Apoorva who had gotten kidnapped. Well, she also has few hit numbers to her credit and one of the most popular numbers featuring Kranti is “Kombadi Palali Tangdi Dharun” from the movie Jatra.

Besides being an actress, Kranti Redkar has also directed a film. She had made her directorial debut in 2014 with the film Kaakan that featured Jitendra Joshi and Urmila Kanitkar in the lead. Kranti and Sameer Wankhede had tied the knot in March 2017. They are blessed with twin daughters.

(The above story first appeared on LatestLY on Oct 08, 2021 09:59 AM IST. For more news and updates on politics, world, sports, entertainment and lifestyle, log on to our website latestly.com).