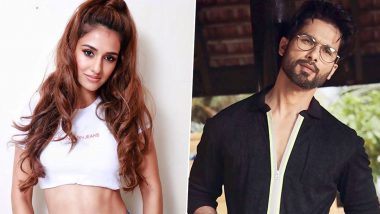 Shahid Kapoor and Disha Patani have never worked with each other. But looks like these two sexy actors of Bollywood might just come together in Shashank Khaitan’s upcoming project. Buzz is rife that the ace filmmaker’s next project is bankrolled by Karan Johar under the banner of Dharma Productions. It is said that KJo has been looking forward to work with Shahid since a long time, but has been waiting for the right script. Jersey: Shahid Kapoor to Head to Chandigarh by September-End to Shoot the Final Schedule?

According to latest reports, Karan Johar has locked in Shahid Kapoor as the lead actor for Shashank Khaitan’s action thriller that is tentatively title as Yoddha. About this project, source was quoted as saying, “It's titled Yoddha and Shahid has already signed on the dotted line for the same. Shoot is expected to begin sometime early next year, after Shahid wraps up Jersey,” reports Filmfare. Talking about the lead actress, a source revealed to Mid-Day, “Though the film is an actioner centered on the protagonist, the female lead has an interesting arc and is crucial to the narrative. Shashank, who is giving finishing touches to the script, recently sat down for a narration with Disha. The actor has expressed her interest in coming on board, but has yet to sign on the dotted line.” Disha Patani Resumes Work Amid COVID-19 Pandemic, Shares a Smiling Pic From Her Vanity.

If Disha Patani signs the dotted line, it would mark her first collaboration with Shahid Kapoor. However, there has been no official announcement made yet. It is also said that this project is expected to go on floors by mid of next year. Keep watching this space for further updates!

(The above story first appeared on LatestLY on Sep 17, 2020 10:32 AM IST. For more news and updates on politics, world, sports, entertainment and lifestyle, log on to our website latestly.com).