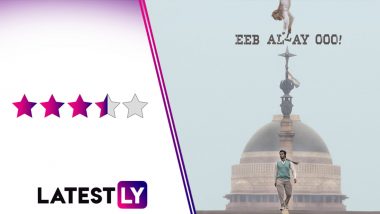 Eeb Allay Ooo Movie Review: While watching Prateek Vats' admirable directorial debut, Eeb Allay Ooo!, for some reason, the song "Kaala Bandar" from Delhi-6 kept playing in my mind. No, Eeb Allay Ooo! has nothing to do with the Rakeysh Omprakash Mehra's highly flawed social drama. Save for the fact, that both the films are set in the capital of India, and has some serious monkey business with little touches of surrealism. And yeah, even Eeb Allay Ooo has its own funky 'monkey' song. But Vats' film is far more realistic and therefore leaves a lasting impact, if you do have a taste for cinema that hits close to reality. Maybe the Delhi-6 song reminded me of how used I was to commercial films trying to pass itself as realistic films. Eeb Allay Ooo Trailer: Prateek Vats' Satirical Drama on Delhi's Monkey Menace Looks Introspective and Engaging (Watch Video).

The strange title is actually the animal call used by monkey repellers in Delhi to drive away monkeys. The key term here is 'drive away'. The first scene itself shows the monkey repellers practising the call as they go about the day trying to curb the monkey menace in the Raisina Hills, where there are government buildings. In a country, where the simian is revered as the monkey God Hanuman, and the animal rights activists are breathing down their necks, the municipality needs to tackle the monkey menace  with dexterity. So they outsource it to a specialised group to repel the primates.

Young Anjani (Shardul Bharadwaj) has just joined this task-force, having migrated to the city with his pregnant sister (Nutan Sinha) and brother-in-law (Shashi Bhushan) both named Shashi. From the first day itself, Anjani knows he isn't fit for the job. He doesn't have the skills of his more experienced co-workers, especially his mentor and friend Mahinder (Mahender Nath). His sister is happy that he got a 'government' job, even though it is on a contract basis. She has troubles of her own, like her husband bringing a gun to their home as part of his security guard job and she thinks its bad omen for their unborn child.

Meanwhile, Anjani is finding it difficult to keep up with the demands of his work, with only his relationship with his nurse neighbour (Naina Sareen) being a solace. Having not enough educational qualification in his resume, Anjani has to trudge along on with a job he hates, and suffer his superior's abrasive behaviour almost on a daily basis. As he can't get the call right, Anjani uses other tricks in his war against the primates, but with not much success.

In an film industry that is obsessed with everything upper-middle class and beyond, Eeb Allay Ooo!'s take on people whose work doesn't fit someone's idea of a dream job does make for a refreshing change. Prateek's focus on realism gives Eeb Allay Ooo! a docudrama feel, but that doesn't stop it from being amusing when it wants to be and hard-hitting when it needs to be. Monkeys in Meerut Take Away Blood Samples of Patients, Medical College Principal Says 'Not COVID-19 Swab Samples' After Panic Grips Area.

Anjani's fears of the animals he has to drive away and the troubles he go through to make himself click is funny at times - in between, he also becomes a social media sensation - but not at the character's expense. We do feel bad for him, for he represents a phase in our own careers, where we have been stuck in jobs we are misfits in.

There is more, though. Ajani's work woes also depicts the government bodies, or rather, the society's itself, caustic attitude to what we consider as lowly labour, and yet we can't get it done ourselves.

With India going through one of the worst humanitarian disasters with the ongoing migrant crisis, Eeb Allay Ooo!'s focus on this class is more poignant that it aims to be. It never wishes to be a song of roses. Anjani's work troubles affect his mental state, and just when you expects things to look up for him, it shoves you back to reality. Do people like Anjani can really find the happiness they seek in our cities? We don't know, and the ambiguous ending of the film doesn't answer that either.

Vats and his writer Shubham keep the focus mostly on the protagonist, which makes it a more explorative story of a profession (this ignoranimus writer didn't know even exists, pardon me) that lacks in distractions. There are occasions where the movie could have delved into the country's present obsession with nationalism, or pure blind religious fanaticism. Eeb Allay Ooo!, however, keeps its subtle and confined to Anjani's story - even a mob-lynching incident isn't harped on much, but you still feels its impact through its protagonist's eyes.

I still wanted more of the moments that Anjani shared with his more assertive girlfriend (Sareen is an amazing find); it had more effect on the narrative than his sister and her husband's kinda forced personal problem. The little moments of them flirting and Kumudh encouraging him in his job (though he behaves like a total a** with her later) provide enough warmth. Unfortunately, Eeb Allay Ooo! doesn't bask in that warmth, it can't. And we have to live with that!

What makes the movie get the impact it has on you is this obsession with realism, and it has a lot to with the actors, all natural performers, doing fantastic work in their respective roles. And I am not forgetting the monkeys too - both the antagonists (are they, though?) and the smirking spectators of crazy human circus that unfolds before them on a daily basis.

Eeb Allay Ooo!'s realistic touches are also enhanced by Saumyananda Sahi's cinematography - there are some really great still frames. Another department that scores is the editing (Tanushree Das), the cuts that happens as the scene shifts from humans to animals add a lot of personality to the film. Special nod also to the sound design and locations scouting.

- An Engaging Watch For Those Who Love Different Cinema

- The Realistic Performances and Treatment

- The Ambiguity and Surrealism Aren't For Everyone

Eeb Allay Ooo! may not have commercial trappings, but it's real strength is its realism -both in  its treatments and in its performances. After watching the film, you may think twice before using 'monkey business' in a light way. Eeb Allay Ooo! is available on YouTube on a 24 hour basis on the We Are One channel.

(The above story first appeared on LatestLY on May 31, 2020 01:34 AM IST. For more news and updates on politics, world, sports, entertainment and lifestyle, log on to our website latestly.com).