In an interview, Bollywood actress Kangana Ranaut opened up on how she feels that Alia Bhatt owes Raazi’s (2018) success to Queen (2013). 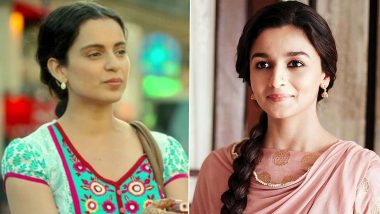 Bollywood is evolving and it's a breath of fresh air to see 'female-driven' films working wonders at the box office. There was a time when an Indian movie without a male lead would not attract audiences, but now the time is changing. Flicks like Queen, Raazi, Saand Ki Aankh and more have been accepted and that's what change is all about. Talking on the same lines, Kangana Ranaut, who is known to speak her mind and not mince words in her recent interview expressed how her movie Queen (2013) paved the path for other parallel films. Rabaut told Pinkvilla that Alia Bhatt owes Raazi’s (2018) success to Queen. Thalaivi: Digital Rights of Kangana Ranaut's Biopic on Jayalalithaa Sold to Netflix and Amazon Prime for Rs 55 Crore.

“We cultivated that audience. Queen started a revolution in terms of parallel films, and now they’re big. Queen’s numbers may not have been that big, but later on, films like Raazi became big because by that time parallel films had become mainstream," she said.

In the same interview when she quizzed if investors feel uncertain to put in money in her film. To which she replied, "For me, what works is that I have a Rs 100 crore film behind me. Even if Manikarnika was co-directed by me, I think that makes a huge difference. You have already made the leap from small films to big films.” Kangana Ranaut Slams B-town Celebs for Supporting #BlackLivesMatter Movement, Questions Their Silence on Sadhu Lynching in Maharashtra.

“I was initially very reluctant to helm that project but eventually, it went on to become a huge hit. That has added a lot of value and I see a lot of people are keen to invest in my film. Of course, it also depends on the crew you get. We have Vijayendra sir and another writer on board. Your script is everything. Other things don’t matter much,” she added. Meanwhile, on the work front, the actress will be next seen in Thalaivi, which is a biopic on former Tamil Nadu Chief Minister J. Jayalalitha. Stay tuned!

(The above story first appeared on LatestLY on Jun 05, 2020 08:34 AM IST. For more news and updates on politics, world, sports, entertainment and lifestyle, log on to our website latestly.com).