Karan Johar Thinks The Lockdown Is Doing ‘Collateral Damage’ To Him And His Kids; Watch As Yash And Roohi Make The Cabinets Their Bunk Beds!

Here's your daily dose of the Johar's! As the Kuch Kuch Hota Hai filmmaker recently shared a video on Instagram which sees his two twins going bonkers inside a cabinet. Read and watch! 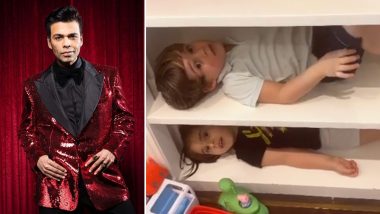 Here's your daily dose of the Johar's! As the Kuch Kuch Hota Hai filmmaker recently shared a video on Instagram which sees his two twins going bonkers. It's now an everyday ritual to see Karan Johar's kids doing all things fun amid the lockdown. And now, the glimpse from their home sees the kids changing minds on where to sleep. In the video, we can see Yash and Roohi all set to spend their sleeping time in the cabinet. As seen in the clip, Yash first enters inside the cupboard to which Karan quizzes him what is he upto? And the reply he gets from the boy is that he is tired. Karan Johar's Kids Yash-Roohi Reveal They Want To Play With AbRam Khan and Taimur Ali Khan While Playing Rapid Fire the KWK Style! (Watch Video).

Ahead in the video, Yash then gets joined by his sister, Roohi inside the cabinet. Surprised and shocked, KJo then starts yelling at the two kids by telling them don't they get a bed to sleep at home. Well, the kids pay no heed to what papa is saying and at last we see the director losing the word battle and saying that it's collateral damage amid the lockdown. But wait, as Yash and Roohi tag daddy's blah blah nonsense. Karan Johar’s Birthday Cake Is Devoured By Yash And Roohi Because They Don’t Want ‘Dadda To Get Fat’ (Watch Video).

Check Out Karan Johar's Video Below:

It's really fun to see these videos, courtesy Karan Johar. As we bet, it surely brings smiles on many faces. Meanwhile, it was recently reported that KJo's two house help was tested positive for COVID-19 wherein his family members were safe. Coming back to the cutesy video, we had a hilarious time watching it, what about you? Stay tuned!

(The above story first appeared on LatestLY on May 28, 2020 08:03 PM IST. For more news and updates on politics, world, sports, entertainment and lifestyle, log on to our website latestly.com).