Kartik Aaryan Fans Are Worried For Shehzada and the Reason Is Allu Arjun's Ala Vaikunthapurramuloo’s Hindi Theatrical Release! 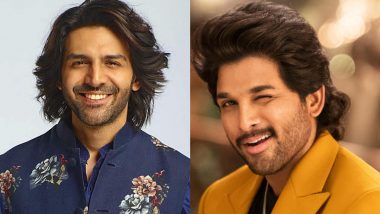 It was after the success of Pushpa: The Rise's dubbed Hindi version, the makers of Allu Arjun's Telugu movie, Ala Vaikunthapurramuloo, also announced to release the Hindi version of the film. While it's obviously good news for all Allu fans that his 2020 film is releasing on big screens on January 26 this year, however, netizens have something else on mind. As Twitterverse feels that Ala Vaikunthapurramuloo's Hindi release might affect Kartik Aaryan's Shehzada's business as its a Hindi remake of the Telugu superhit.  Ala Vaikunthapurramuloo: Cast, Plot, Release Date, Where To Watch Online – All You Need To Know About Allu Arjun’s Superhit Film.

My suggestion to makers #RohitDhawan @TheAaryanKartik of this movie to change few scenes from #AlaVaikunthapurramuloo because I have seen original movie and that has also few screen play. Contact me if you need help.

Gone case for #Shehzada makers ! Now what will they do by making a remake which is also releasing in hindi and the remake film is already in making. @TSeries @TheAaryanKartik https://t.co/0beDFl3tCf

With this, all we feel is that Shehzada's fate will be decided on how the makers market the film. Also, considering Kartik has a huge fan following, loyal fans will not disappoint for sure. What's your take on this? Will Shehzada face the repercussions after Ala Vaikunthapurramuloo Hindi release? Tell us in the comment section below.

(The above story first appeared on LatestLY on Jan 18, 2022 07:12 PM IST. For more news and updates on politics, world, sports, entertainment and lifestyle, log on to our website latestly.com).