Mira Nair Reminisces Working with Irrfan Khan in Salaam Bombay And The Namesake, Says ‘His Art and Humanity Will Be Badly Missed’

Mira Nair's "The Namesake" is considered one of the best works of Irrfan Khan and the filmmaker now shares the story of how she met and developed a long-lasting friendship with the actor, who passed away after a battle with cancer. While scouting talent for her 1988 feature Salaam Bombay! 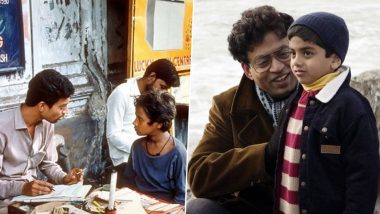 Mira Nair's "The Namesake" is considered one of the best works of Irrfan Khan and the filmmaker now shares the story of how she met and developed a long-lasting friendship with the actor, who passed away after a battle with cancer. While scouting talent for her 1988 feature "Salaam Bombay!", Nair went to the National School of Drama in Delhi where she spotted the then 18-year-old actor - "tall and gangly and angular — like a praying mantis". Amul Topical Pays Tribute to Late Actor Irrfan Khan by Remembering His Iconic Characters (View Pic)

"And of course, he had this extraordinary face. He was only 18, but he still had a craggy face and those hooded eyes. The interesting thing was that he was very keenly focused. He was acutely observant and very open, not filled with any kind of big attitude," the director recalled during a telephonic conversation with the New York Times. Irrfan, 54, died in a Mumbai hospital on Wednesday after a two year fight with a rare form of cancer. He was buried at the Versova graveyard. Paulo Coelho Mourns Irrfan Khan’s Sudden Demise With a Bhagavad Gita Quote (Read Tweet)

Nair said that the actor left the drama school on her request and lived in a Mumbai flat for two-three months with her, another cinematographer and many street kids. Initially set to play street gang leader Salim, the actor was later given a one-day scene of the scribe who rips off the street child and doesn't send the letter home to his mother. The filmmaker said they realised that at his height of around 6 ft, he was "double the length of any malnourished street child".

"The kids came up to his waist. It was not possible for him to be physically part of this group. It was a terribly hard thing to tell this wonderful actor that I couldn't cast him, but he understood that," Nair said. But despite this, the two remained friends. Sixteen years later, as she promised, Nair gave him a lead part in "The Namesake", based on Jhumpa Lahiri's novel of the same name.

"I had no idea when we brought him out here to play Ashoke Ganguli that it was Irrfan's first time in America. And he looked at things with the eyes of not just an excited young man seeing this other world, but also with the eyes of the character who had to play it." Nair said she introduced Irrfan to Lahiri's parents and asked him to base his character on her father.

"And it was really beautiful because Irrfan is not Bengali, but he looks Bengali and he's such an extraordinary actor that he can internalize all those things that make somebody as particular as they are," she added. The filmmaker then recalled one of the most moving scenes from the movie where Irrfan's Ashoke Ganguli is having a conversation with his son, Gogol, explaining how he named him after Ukrainian author Nikolai Gogol.

"And on the second take, he said to me, 'Tujhe kuch aur chahiye, na?' ('You want something') And I said: 'Yeah, I want a tear to glass your eyes. I don't want it to fall down.' "In fact, I'd say something funny like, 'If the bloody tear falls down your cheek, I will give you a slap.' That's how we used to talk, nothing precious -- a joke, as if we were car mechanics and I was telling him to shift into third gear," Nair said.

The director said the last time she met Irrfan was a year ago in London where he was receiving treatment for neuroendocrine tumour and the actor was "remarkably philosophical". "We ate very well in a cafe. He flirted with the waitress. My friend came in on a bike and he got on the bike and he said: 'I just need to. I need to do one block. Just one'.

"We had our last pictures together on this bike, and he was in full-blown treatment and yet he was in dapper linen.  Meanwhile, actor Kal Penn, who played Irrfan's son in the movie, also posted a tribute to the actor. "Irrfan's art and humanity will be badly missed. Never seen someone use the beats of silence so beautifully to convey so much about who we are. Sending love to Sutapa and the family," the actor tweeted.