Pankaj Kapur celebrates his birthday today and we thought rather than telling you about what a great actor he is, we will talk about a few interesting facts about the man. The biggest myth that the internet has about is that he did engineering before NSD happened. Well, that's untrue! 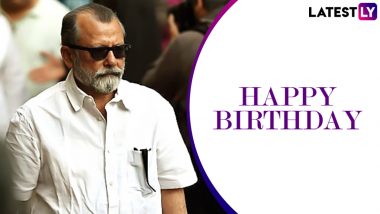 Indian cinema is honoured to have Pankaj Kapur working for it. He is one of the actors of humungous merit. He will always be the carrot-chomping smart and witty detective Karamchand for us even when his Mussadi Lal from Office Office is a hit. The present generation mostly knows him as Shahid Kapoor's father but for us, he will always be Karamchand. His role of Taneja in Jaane Bhi Do Yaaron is still fresh in our minds and so is his work in Ek Ruka Hua Faisla. Someone with such impressive body of work deserves so much more but the actor feels he has got his due.  Pankaj Kapur Birthday Special: 7 Roles Of The Legendary Actor Which Prove What A Genius He Is

On his birthday, we decided to make the present generation a little more about the man Pankaj Kapur rather than the stalwart of acting Pankaj Kapur. Check out five interesting facts about him.

Raakh is one of those gems of Aamir Khan's career that's vastly underappreciated. But what people aren't aware of is that Kapur picked his first National Award win for this same movie. He played an inspector who witnesses a gruesome crime and still stays silent.

#A on-sccreen father at the age of 29

Pankaj Kapur had said during an interview to Filmfare that he moved to television because he was getting roles of heroine’s brother, the hero’s friend, or maybe a villain. He played Amrita Singh's father in Chameli Ki Shaadi when he was just 29.

#Rajesh Khanna not an inspo

In the same interview, Kapur said that he was misquoted about calling Rajesh Khanna as his inspiration. He rather looked up to Dilip Kumar saab, Nasser, Amitabh Bachchan, Robert De Niro, Dustin Hoffman, Marlon Brando. He just was exposed to more Khanna movies while growing up. Jersey: Shahid Kapoor Is Nervous About Working With Dad Pankaj Kapur in His Next

The internet is abuzz with a story that Kapur did engineering and then moved to theatre. He rubbished the story in a Forbes interview saying, "I did not do engineering. I don’t know how it’s all over the internet,”

(The above story first appeared on LatestLY on May 29, 2021 08:10 AM IST. For more news and updates on politics, world, sports, entertainment and lifestyle, log on to our website latestly.com).