Bollywood actress Deepika Padukone will be seen opposite Shah Rukh Khan and John Abraham in Pathan. The film is one of the most anticipated projects, considering it marks SRK's comeback and also will the Khan along with DP. Talking on the same lines, we hear is that Padukone is all set to rock a pixie look in the film. 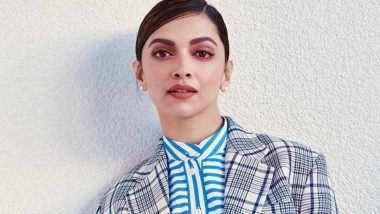 Bollywood actress Deepika Padukone will be seen opposite Shah Rukh Khan and John Abraham in Pathan. The film is one of the most anticipated projects, considering it marks SRK's comeback and also will see Khan alongside DP. The movie was supposed to hit the screens this year, but nothing as such has been announced yet by the makers. Now, the latest we hear is an update about Deepika and her avatar in the flick. As reported in Pinkvilla, the actress will be seen rocking a pixie cut in Pathan. Pathan: Shah Rukh Khan Spotted Shooting for High Octane Action Scenes in Dubai.

"It's the character of a suave agent, who goes on a mission alongside Shah Rukh Khan, and after contemplating on multiple looks, they finally zeroed into the boy cut (short hair) avatar for DP. She has already shot a considerable chunk in the film, and is expected to join the gang of Pathan again from mid of March," a trade source revealed to the portal.

That's not it, as the report further hints that Deepika's introduction scene in the film also happens to be a grand one. "It was a massive set up to film her introductory scene at YRF studios. The audience is on to see DP like never before in Pathan, " the source added. Pathan: Shah Rukh Khan, Deepika Padukone and John Abraham's Film To Release In 2022!

However, the surprise does not end there as the three leads along with Salman Khan in an extended cameo will also be seen performing some high-octane scenes in the actioner. The source said, "It's going to be a big-screen visual spectacle with action and thrill on a different level. The three leads - SRK, DP and John - as also Salman, who has an extended cameo, have the action in plenty to offer in the film." Cannot wait for this one!

(The above story first appeared on LatestLY on Mar 03, 2021 03:08 PM IST. For more news and updates on politics, world, sports, entertainment and lifestyle, log on to our website latestly.com).