Bollywood has always spoken for things that matter. After Diljit Dosanjh attending the ongoing farmers’ protest at Singhu border, Delhi, the latest ones to show support are Priyanka Chopra Jonas, Parineeti Chopra, Sonam Kapoor and more. Check it out. 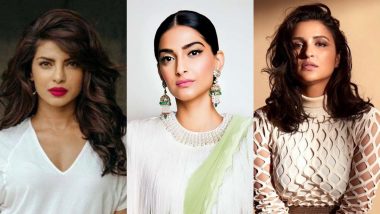 Bollywood has always spoken for things that matter. After Diljit Dosanjh attending the ongoing farmers’ protest at Singhu border, Delhi, the latest ones to show support are Priyanka Chopra Jonas, Parineeti Chopra, Sonam Kapoor and more. If you are the one who is living under the rock then we would like to educate you that farmers across the country are protesting against two bills passed by the centre, which they fear will eliminate the MSP. Having said that, the women of Bollywood has finally voiced their opinion and have shown their stance. Diljit Dosanjh Donates Rs 1 Crore to Buy Winter Wear for Protesting Farmers, Singer Singga Reveals On Instagram (Watch Video).

Global icon Priyanka Chopra took to the micro-blogging site and expressed how the grievance of our food soldiers need to be addressed as we live in a democracy. Not just this, Sonam shared a few pics on Instagram and flashed the plight as well as the spirit of the farmers along with a quote by Daniel Webster. Even Priyanka's sister Parineeti landed joined them by saying, "Had a food? Thank a farmer." Diljit Dosanjh, Sonu Sood, Richa Chadha and Others Extend Their Support to the Protesting Farmers (View Tweets).

Our farmers are India’s Food Soldiers. Their fears need to be allayed. Their hopes need to be met. As a thriving democracy, we must ensure that this crises is resolved sooner than later. https://t.co/PDOD0AIeFv

We are so proud of our Bollywood fraternity for making it clear with whom they stand by amid the farmers' protest. On December 5, Diljit had joined the protest and urged the government by saying, “We have only one request from the Centre... please fulfil the demands of our farmers. Everyone is sitting here peacefully and the entire country is with farmers.” Stay tuned!

(The above story first appeared on LatestLY on Dec 06, 2020 09:57 PM IST. For more news and updates on politics, world, sports, entertainment and lifestyle, log on to our website latestly.com).