Rehna Hai Terre Dil Mein 2: Vicky Kaushal and Kriti Sanon Approached to Be a Part of the Sequel?

Ravi Udyawar of Mom fame has been approached to work as the director of this film. He is currently busy with the Siddhant Chaturvedi and Rashmika Mandanna starrer Yudhra and will start working on Rehna Hai Terre Dil Me sequel post this film. 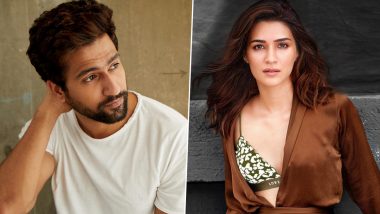 Rehna Hai Terre Dil Mein is a special film for many reasons. The film that starred R Madhavan and Dia Mirza in the lead roles was a flop at the box office but gained popularity after a few years of its release. The film is considered a classic romantic and people still croon to the songs from this film. Jackky Bhagnani has been very keen on making a sequel of the film and has been rumoured to be in talks with actors to get them on board for the sequel. If reports are to believed, Vicky Kaushal and Kriti Sanon have been approached by the producers for Rehna Hai Tere Dil Mein 2. Rehna Hai Terre Dil Mein: R Madhavan and Dia Mirza Remember Their Romantic Film as It Clocks 18 Years and Jackky Bhagnani's Cameo.

While it was earlier reported that Jackky wanted to work with the original cast of the film, he is now looking for fresh faces. A source close to the development revealed to Pinkvilla, “They were on the lookout for a fresh and unconventional casting and that’s when, the casting director suggested the names of Kriti and Vicky. Both the actors are keen to do the film, and the modalities in terms of the financials and dates for the shoot schedule is being worked upon at the moment. The idea is to go on the floors by end of 2022." They added that the paperwork for the same is yet to be done.

Ravi Udyawar of Mom fame has been approached to work as the director of this film. He is currently busy with the Siddhant Chaturvedi and Rashmika Mandanna starrer Yudhra and will start working on Rehna Hai Terre Dil Me sequel post this film. “Jackky is very excited for this film and is personally involved in every aspect, right from the script to the music. It’s a cult film and taking it forward is a big responsibility,” added the source. The film is said to be a romantic comedy. Dia Mirza Is Boho Chic and Her Rad Dress Should Be in Your Next Holiday Suitcase!

Earlier, talking about the sequel, Dia Mirza had said during a Live Session with Madhavan, “We are doing our best to make it happen, but we will only work together when we can give our best. There is something so special about Reena and Maddy and I think there was an innocence and honesty we shared in RHTDM that resonates so deeply with everyone even today. We wouldn’t want to dilute that in any way.” We, now wait for the official announcement to come our way.

(The above story first appeared on LatestLY on Mar 30, 2021 05:59 PM IST. For more news and updates on politics, world, sports, entertainment and lifestyle, log on to our website latestly.com).